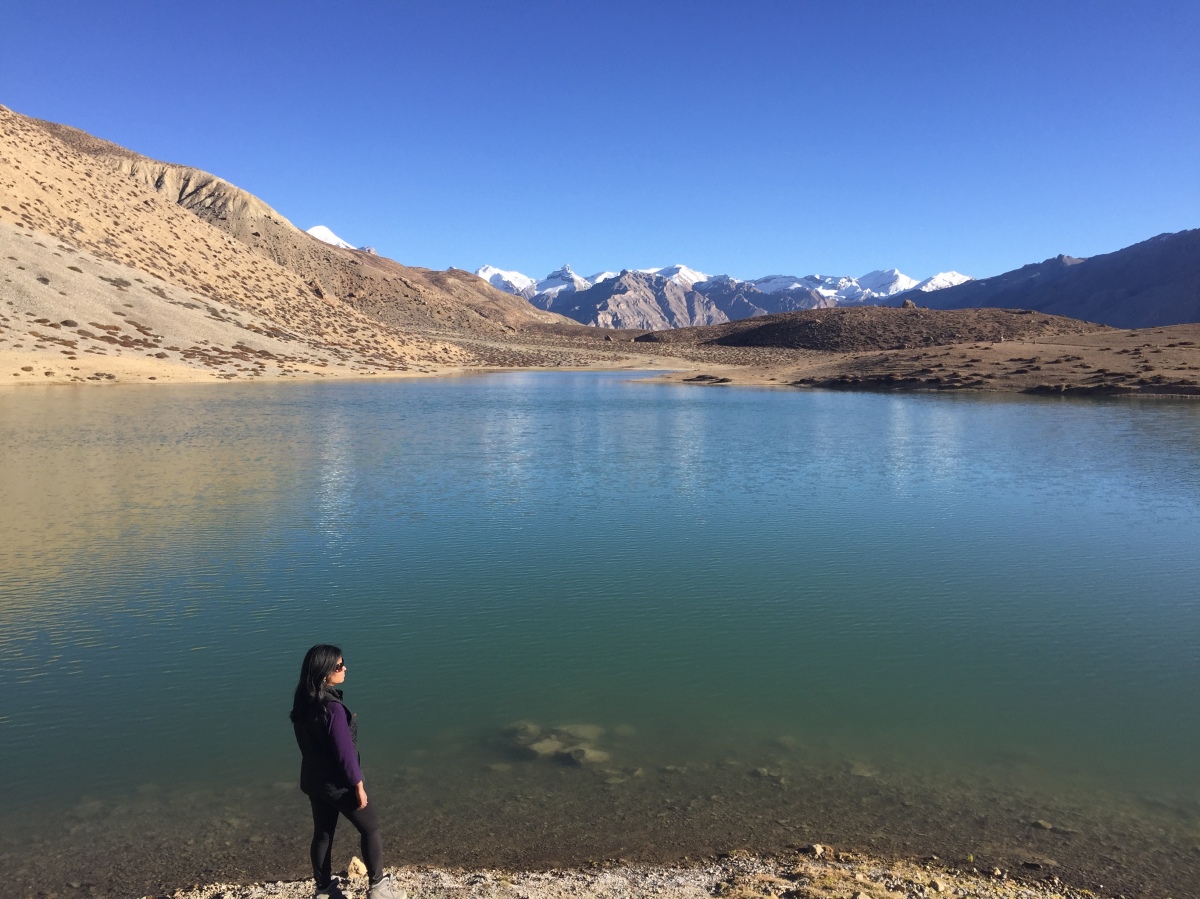 “Yehi best time hai ji!” (This is the best time), proclaimed Raju, our guide and driver for the past 3 days at Spiti.  As I looked at the way ahead towards Dhankar Lake with the afternoon Sun at its blazing best, I couldn’t stop myself from asking Raju if some other time would have been better.

This timing was the result of a tweak in our original plan for that day, which was to arrive at Dhankar village in the morning, visit the spectacular 1000 year old Dhankar Monastery, explore the village for a while and then make our way to Dhankar Lake. However, we changed our plan while on our way, did other things and landed here in the afternoon instead. It was about 2.45 PM, and by now we had learnt that afternoon is the time when it gets really really hot in this cold desert mountain.

Raju had informed that it would take us about an hour to climb up the stretch of about 2.5 Km. It is considered an easy hike but the steep climb in that altitude can make you breathless within a few seconds. It can be physically challenging if one is not used to steep climbs.

A muddy trail marked by the beautiful colours of Autumn welcomed us as we took our first step towards our destination. Armed with a bottle of water each, the three of us set off determined to reach the top in less than the stipulated 1-hour time.

As we climbed up, Dhankar monastery and the village homes against the intricately designed surrounding mountains was a sight to behold. A particular patch looked like a termite hill, another had a tunnel like opening and looked like a secret cave leading way down to Spiti river, the new monastery was sparkling in its golden yellow colour, the meandering road snaking its way up to the village was clearly visible, dotting here and there were brightly colored shrubs in hues of orange, yellow, brown and green. It appeared like a scene of some other planet, straight out of a Sci-fi movie.

Further ahead the muddy trail became steeper and gave way to loose pebbles scattered all along the pathway. One mis-step in the steep ridges and you will go down the rocky mountain. I thanked my foresighted decision of wearing my trekking shoes to Spiti instead of my normal sports shoes or any other shoes. Up here, the wind was pretty strong too.

Dhankar lake lies hidden behind the mountains that surround the Dhankar village. Situated at a height of 4136 meters, it remains frozen and inaccessible for most part of the year. Dhankar lake is considered holy by the local people.

We made the climb in about 45 min. As we approached the lake, it looked like a tiny pool of water that totally disappointed my sister who had put in quite a bit of effort to make the climb. Raju chose to ignore the snide remark she made at this point, urging us to walk  along the side of the lake.

As we continued walking, the colour of the lake kept changing and on reaching the far end of the lake we were speechless, mesmerized by the amazing view that lay in front of us! Stunned by the turquoise colour of the water and the barren mountains with their snow covered peaks in the backdrop, we were dumbstruck! To add to it, the azure–blue sky and complete silence. No sound rang out from the shimmering stillness of the lake other than the gentle whistling of the wind. The idyllic scene looked like nature’s amphitheater that simply took our breath away.

I felt complete peace and everything seemed utterly beautiful. There was nobody around at that time other than the three of us. Absorbing all the calm and serenity, we sat in complete silence and conversed in unspoken words as my mind and heart rejoiced with joy. Perhaps a manifestation of the divine presence in the lake, as believed by the locals.

“Ab chale, Madamji?” (Shall we leave now, Ma’am?), Raju’s voice bounced me back to reality. I smiled and nodded in agreement. I had lost all track of time. A quick glance at my watch informed that we’d been there for more than an hour. With a huge deal of effort, I reluctantly rose to my feet to bid farewell to the soothing time and moment beside the calm and dreamy Lake. With the resolve to come back someday, I tied a prayer flag before I followed Raju retracing our way back.

As I write this today, it feels like a dream and I long for the same feeling to take over my senses once again.

Note: All pictures are unedited, raw photos clicked through iPhone-6

10 thoughts on “Dhankar Lake – A Melody of Peace and Solitude”

My favourite gang of some of the most beautiful people. 💕💕
I had no idea so much went into photoshoots until my friend, a professional photographer, offered to do one for us. The camera and other equipment aside, there’s emotions, storytelling, choreographing, and so much more. It involves a LOT of hard work!
Life’s myriad hues ebbs and flows like hues of the ocean
You made all the negativity of 2020 disappear as the year ended and likewise ensured a positive beginning of 2021. Blessed to have you in my life.
The only ones that always make me smile, well almost always...
@thebuffalorider
Loading Comments...
%d bloggers like this: