Exploring ‘Paris of the East’ on a Cold and Rainy Day

Clad in a warm coat and a beautiful scarf, Miss Sunny was there right on time. “I think you should put on something warm”, she advised with a look of surprise seeing me ready to leave in a jeans and light sweater. It was an April morning and I was inside the comfort of my hotel with no idea how cold it was outside. Though there was no sun and the weather looked bleak and gloomy. I hadn’t packed proper warm clothes as I wasn’t prepared for it to be this cold. However, I went back to my room, scanned my suitcase and put on two more layers. Layering keeps you warm, and two t-shirts is equivalent to one sweater – one of the many things learnt during my Himalayan treks.

I was in Shanghai for a 3-day work-related visit and was put up at Renaissance Shanghai Caohejing Hotel, which is situated in the business district and a little off from the main city. Miss Sunny was my guide and kind enough to come all the way to escort me to the city. Otherwise, with my zero knowledge of Mandarin, it would have gotten difficult.

My Shanghai trip was close on the heels of a trek to the Himalayas and naturally I wasn’t too happy. I hoped and prayed that it would be moved but that didn’t happen. As I was reluctantly getting my tickets and booking my hotel, the traveler in me suddenly woke up, just in time, to remind that this was an opportunity! How could I miss that! So, I added a day to my itinerary to see what I can of Shanghai. A little bit of research and I found Miss Sunny through Trip Advisor recommendations and contacted her. And, I highly recommend her (sunnyerday@qq.com). Getting around in China can get tricky if you have no knowledge of Mandarin.

As we stepped out of the hotel, I realized just how cold it was! It was raining too and I had to borrow an umbrella from the hotel lobby. I am so not a rain person! Anyway, there was little I could do. So, I made peace and was all set to get a taste of the ‘Paris of the East’ with Miss Sunny by my side.

We took a taxi and headed straight to the Jade Buddha temple, which is situated in the heart of the bustling city of Shanghai.

The temple houses Buddha statues in two postures – sitting and reclining. The reclining one represents the Buddha’s death – the peaceful Sakyamuni. It portrays the sedate face of the Buddha and is also known as the ‘lucky repose’. There are two of these sparkling white and crystal-clear statues. The smaller one is the original famous Jade Buddha statue that was cut out of a single Jade and was imported by sea to Shanghai by Buddhist monks from Burma during the 1800s. The larger one is made of marble and was donated by Singapore. Miss Sunny mentioned that many people mistakenly think the larger one to be the Jade Buddha.

The original reclining Jade Buddha is kept inside a glass casing

The marble reclining Buddha, often mistaken as the Jade Buddha

The temple is large. We walked around its three halls and two courtyards as Miss Sunny kept enlightening me with small nuggets of information every now and then. An interesting thing that I learnt here was the feminine form of Buddha – the Mother of Liberation, known as Quan Yin in China and Tara in Tibet. She is the Goddess of Compassion, a symbol of purity of heart and spirit. The female Buddha was new to me, I hadn’t known this before. 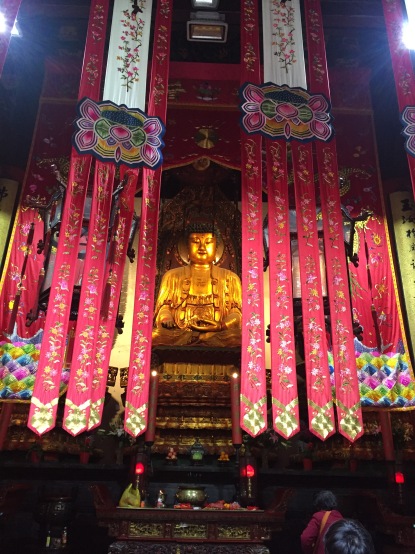 People’s Square is the main public square of the city with the main attractions being the Shanghai Museum, Shanghai Grand Theater, and the People’s Park. People’s Square also has several tall buildings, fountains, and other structures. This place used to be a horse racing track before the Communist Revolution. Not much of a museum person, I decided to explore People’s Park instead.

The park was beautiful with flowers blooming all over. The unexpected splash of colours was enough to light up the dull and dreary day. As we strolled on admiring the colours, a flurry of activities diverted my attention nearby, where a group of men and women had gathered around colourful umbrellas laid out sporadically. On a closer look, I noticed all the umbrellas had some kind of laminated paper pasted on the outer side.

And I learnt a fascinating story. This was Shanghai marriage market where parents flock every weekend to find a match for their children. The laminated sheets contain details of bride or groom. Parents stick that on the outer side of an open umbrella and sit beside it all day for other parents to come by and if they think it’s a match they get their children connected. Reminded me of our online matrimony sites, though that’s virtual but same concept. The Marriage Market was unique and made my visit to People’s Square a memorable one.

The Bund is the waterfront area and has been the symbol of Shanghai for hundreds of years. It is located in central Shanghai on the banks of Huangpu River. Once again a splash of colours greeted us – the wall of flowers of various hues at the entrance. Infused with instant delight and happiness, I just kept gawking in awe.

The Puxi side is characterized by 26 buildings of different architectural styles – Gothic, Baroque, Romanesque, Classicism and the Renaissance. The river was like a connecting link for the old and the new. Having seen this place in so many movies, walking on it felt quite surreal. The weather was playing spoilsport and had marred the view to a great extent.

Miss Sunny informed that there is a sightseeing tunnel of about 650 m. that runs under the river from the Bund in Puxi, to the Oriental Pearl TV Tower in Pudong. It is supposedly an interesting experience by a speed train through the tunnel with colorful radiating lights. However, we had other places to visit and couldn’t go to Pudong just yet. My hotel was also in Pudong side. Miss Sunny also talked about the fantastic night view with the colorful lights floating on the river and the flashing lights from the far side of the river. One can also take a ferry ride and view the city from the river. I missed night views altogether as I had to reach office early the next morning and I couldn’t afford to compromise with my call of duty in anyway.

The Former French Concession has a very European feel with its gorgeous tree-lined avenues and villa-style buildings. True to its name, the French once ruled this part of the city and many of Shanghai’s expat population live in this area. “After the Opium Wars, the French, the British, and the Americans were administering certain pockets of Shanghai”, explained Miss Sunny. 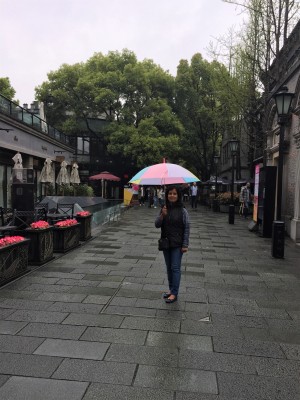 The fountain is a distinguishing feature of this place

The area is marked by the presence of hip cafes and restaurants, concept bars, breweries, boutiques, art galleries and antique stores. We decided to have lunch here. I have forgotten the name of the place where we had lunch. Not just that, I can’t recall the names of any of the food items we had there other than Wulong Tea. And being the non-foodie that I am, I didn’t click any pictures of the exotic food! And, that’s making me feel awful right now! Miss Sunny had taken the trouble to explain each dish in great detail.

However, indulging in interesting conversations at the lunch table with Miss Sunny about life in general and the similarities and differences therewith in our respective countries was far more interesting to me than food at that moment. 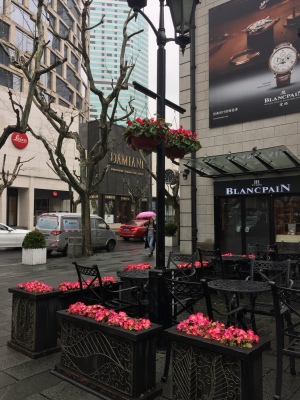 What’s China without some Chinese tea?

I was loving every bit of my tour so far. The rainy day and the cumbersome umbrella was a botheration but I couldn’t care less. The city of Shanghai was incredible and everything amazed and fascinated me. After lunch it was time to go visit some parts of the old city.

4 thoughts on “Streets of Shanghai on a Sunday”