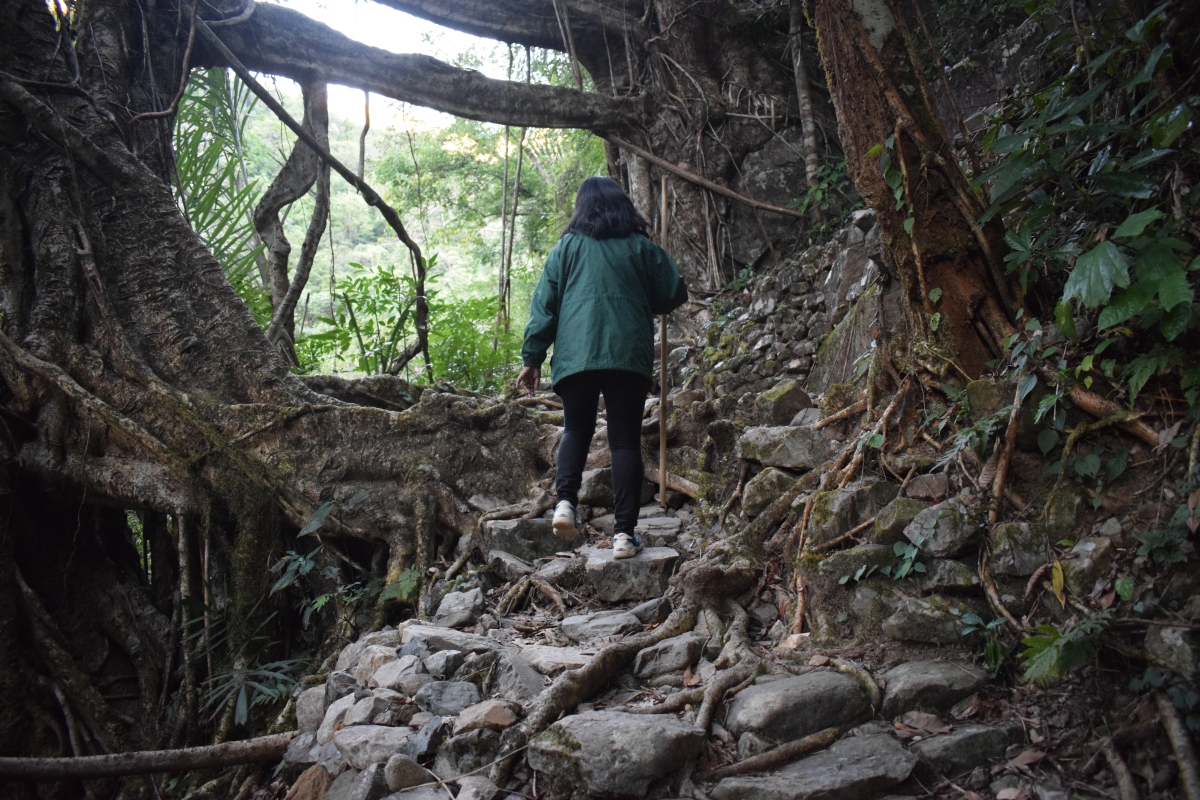 I stepped out of my room and looked up at the sky. The moon shone brilliantly and looked like a perfectly rounded sphere of white radiance sailing in the cloudless night. Millions of twinkling stars accompanying the moon seemed to be looking at me knowing exactly what I was thinking.

We were spending the night at Nongriat in a homestay, which was right next to the double root bridge – a bridge that epitomizes the harmonious blend of Nature’s abundance and Man’s hard work. Braving 3600 steps, we had arrived at Nongriat earlier that day.

Later that night, we befriended four travellers staying at the homestay. Gautam and Om were from Mumbai and were biking in the North East while Rajat and Ashwin were solo travellers. Rajat came from Delhi and Ashwin all the way from the city of Mysore in the South. I was with two of my cousin sisters and we were exploring our own home state. Our destination for the next day was Rainbow Falls and we decided to go there together as a team. Our guide, Droning was quite amused to find the three sisters multiply into this little army in just a few hours. Droning lives in Nongriat and is a young 15-year-old lad, who is preparing to appear for his school final this year.

Next day started early for us. We were up by 5.30 AM and left the homestay at 6.00 AM with our newly found acquaintances. The sun wasn’t up yet but the skies looked clear. Soon, we found ourselves crossing a shaky iron bridge that threatened to throw us off as it swayed to and fro while we crossed it one foot at a time. We had encountered such bridges the day before as well, but I for one was still not used to them and could feel my knees quiver. This particular one was worse as the iron was rusted in places. After a while, we crossed another root bridge and the root bridges are so much more stable!

The sound of running water of the falls teased us for a long while as we continued walking and expected to see it at every turn but the falls kept eluding us. Then, in a flash it suddenly emerged from the thick green envelope. There it was! Rainbow Falls – a hidden treasure in the deep jungles of Cherrapunjee, Meghalaya. The mighty roaring water was spectacular leaving us transfixed for a moment.

I stared at it from the top of the hill for a while before convincing myself that this was not a dream. Only then, was I able to descend the final flight of steps towards the falls. As I looked on, I noticed the enormous force of the water as it pounded its way right into the pool below. The pool was a brilliant sparkling blue and looked serene and calm, unaffected by the torrents of water pounding on it with such great force.

The sun was just about making its way through the tall hills around the falls. So, we would have to wait a while to see the rainbow that appears on the falls. It’s this permanent rainbow across the falls that makes it unique and gives it the name.

I found myself a comfortable seating area from where I could view the falls in its entirety. One of my sisters joined me. The rest were already making their way down through the huge formidable boulders. We watched them go down. Two of the guys couldn’t control their urge and very soon plunged into the crystal clear blue waters of the pool below. The water was so clear that we could see right through into the pebbles at the bottom.

The dazzling blue water was too inviting. My sister could hold herself no longer and decided to climb down.  The huge boulders intimidated me and I wasn’t sure. It’s my short height that limits me, shaking my confidence at such times, as I know my legs will not reach out to all places. I felt quite comfortable where I was but my sister insisted. Soon, Droning was summoned to give me a hand and help me navigate my way down to the blue pool.

Down below, the falls was magnificent but at the same time terrifying and unnerving. I stood there for a while watching the rest of my gang braving the chill and swimming and wading in the water. At one point all of them climbed up a huge boulder that had a ladder against it for a closer view of the falls. I wasn’t able to muster the courage.

Another sparkling green pool of water amidst huge rocks and boulders glistened in the morning sun and lay quietly away from the falls. While the others went towards that, I decided to go back to my comfort place and again not without Droning’s help. One of my sisters and Rajat joined me too.

We chatted and waited patiently for another hour and a half as the sun’s rays slowly descended down the falls. The rest settled in a place down below after they had their fill of exploring and posing for photographs of kinds. We didn’t know at what point the rainbow would appear and every now and then imagined seeing colours when there weren’t any.


And when the rainbow actually appeared, we literally shrieked in unison. It was so sudden that I felt as if an invisible fairy godmother had touched it with her magic wand. We reveled in the enigmatic beauty of Mother Nature for a while.

It was almost 10.30 AM. A few more people had now started coming in and it was time for us to leave.

In our anticipation of the rainbow, we had forgotten that we had missed breakfast. Having been up for more than 4 hours with quite a bit of physical activity, our stomachs had started growling. The girls had meticulously packed in a few bread slices from our Homestay the night before. The boys had none. The food was far from sufficient and we still had a long way to go. We had decided not to go back to Nongriat, instead follow a jungle trail that goes straight to Cherrapunjee.

We had already invited trouble, just that we were still unaware…. (Continued)

26 thoughts on “In Pursuit of the Elusive Rainbow”