The morning was bright and sunny. I expected a warm day but on stepping out of the hotel realized there was a strong wind blowing and it felt rather cold. It was a December morning and quite like one!

My parents and I were out to explore more of Diu, which had already surprised me with the amazing sunset and sunrise I experienced in its city beach – Jallandhar.

There is more to Diu than just the beaches and here are some of those in order of my preference.

I am more of a nature person than a history person, Baba is quite the opposite, and Ma keeps changing her taste depending on several factors. However, when it comes to forts all three of us are on the same page and equally interested.

At the first glance, Diu Fort felt disappointing but we quickly realized that we were expecting the architectural marvel of Mughal forts like the ones in Agra and Jaipur from a Portugese Fort. The Portugese weren’t as lavish as the Mughals neither could they afford the grandeur of the Mughals. 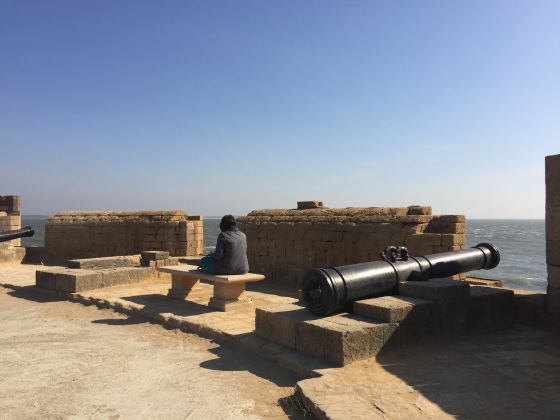 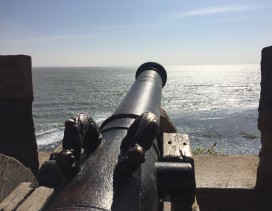 Having made peace with that, we noticed that the unique position of Diu Fort overlooking the sea made it very appealing. The huge wall around the fort secured it tight with the sea on three sides acting as an additional barrier. The fourth side used to be protected by a canal. Huge canons occupied the bastions that pointed in different directions towards the sea. These bastions opened into attractive courtyards lined with rows of trees. We crossed several gates that looked simple yet sturdy, then there were walkways, and few rooms as well. 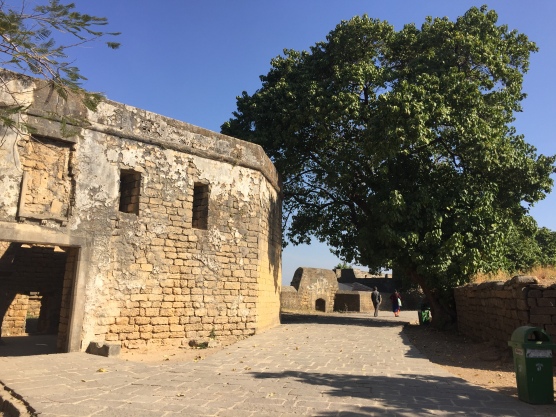 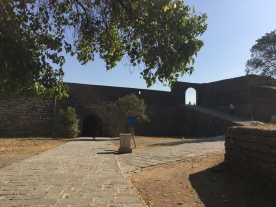 A light house was located at one end of the fort. The history of the fort is displayed at the entrance gate. A section of the fort is not open to public and has the office of Jail Superintendent and used to house Diu Prison until recently. 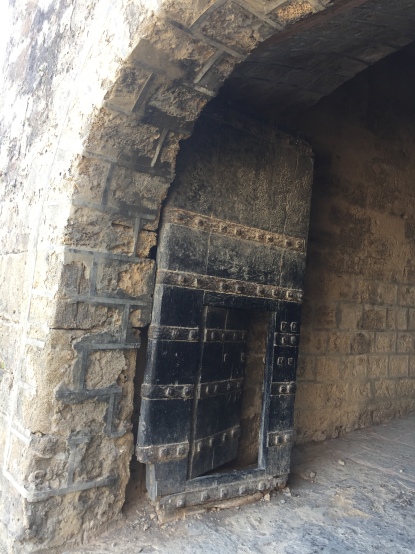 Panikotha (or Fortim-do-Mar), a former prison, located in the middle of the sea can also be seen from the fort. Panikotha was once connected with the land by an under-sea tunnel. 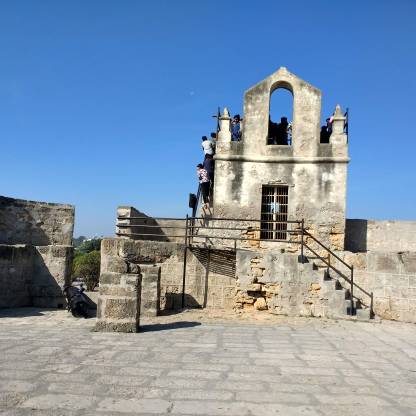 Somewhere in the fort

A labyrinth of interconnected orangish-yellow wind-eroded rocks; trees springing up here and there with their artistic roots hanging in random places; sun beams passing through narrow crevices putting up a beautiful play of light and shadow – that’s what we saw at Naida Caves. I remember jokingly telling Ma, “I can imagine an old woman holding her pet black cat wearing a pointed black hat with a cackling voice suddenly springing up from nowhere.” 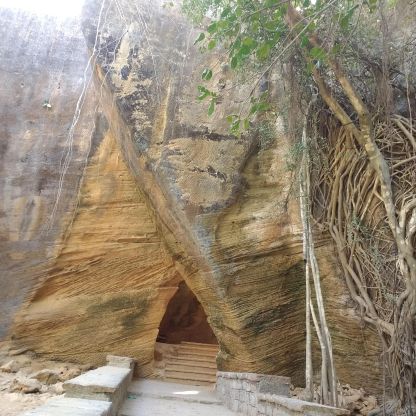 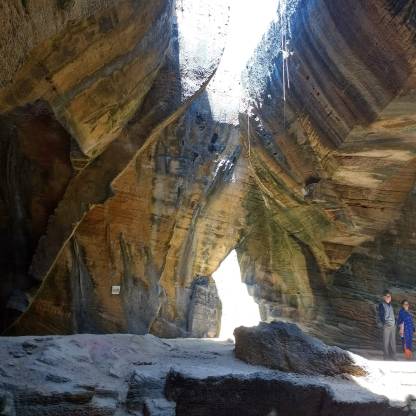 The cave was truly beautiful but seemed tad cosmetic to us. We couldn’t help the unfair comparison of this cave with the rustic ones back in our hometown Meghalaya. While Ma and I had a little fun with our imaginations running wild, Baba was clearly not impressed. I loved the trees though!

Five Shiva Lingas situated inside a cave located just a few feet away from the sea – that’s Gangeshwar Temple. Apparently, the temple dates back to the times of the Mahabharata. It’s simplicity and quaintness is what amazed me.

The Shiva Lingas are of various heights and are believed to have been installed by the five Pandavas during their exile in the forest. The varying heights portray the seniority of the Pandava brothers, except the largest one at the center which represents Bheem, the strongest brother. There is a well on one side of the cave that apparently gets filled with sweet water during low tide despite being surrounded by the sea. Locals call this flow of sweet water as Ganga Dhara (sacred flow of River Ganga) and that’s how the temple gets its name too. During high tide, the Shiva Lingas are washed by tidal waves.

Someone had told me that St. Paul’s Cathedral was really amazing, which led me to build up an expectation that was obviously not satiable. So, I am probably biased when I say  that for me the churches in my hometown Shillong are far more beautiful. Anyway, the church did have aesthetically appealing interiors with elaborate wood work. We lit candles at the altar and sat quietly for a while before walking towards St. Thomas Church located right next to it. 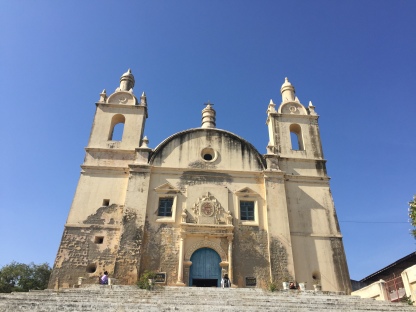 St. Thomas Church is also known as Diu museum but didn’t have much to offer other than few antique artifacts made of petrified wood, mostly figures of Catholic saints, from the Portuguese era. 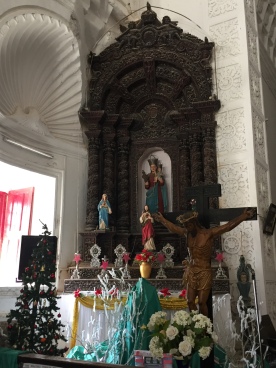 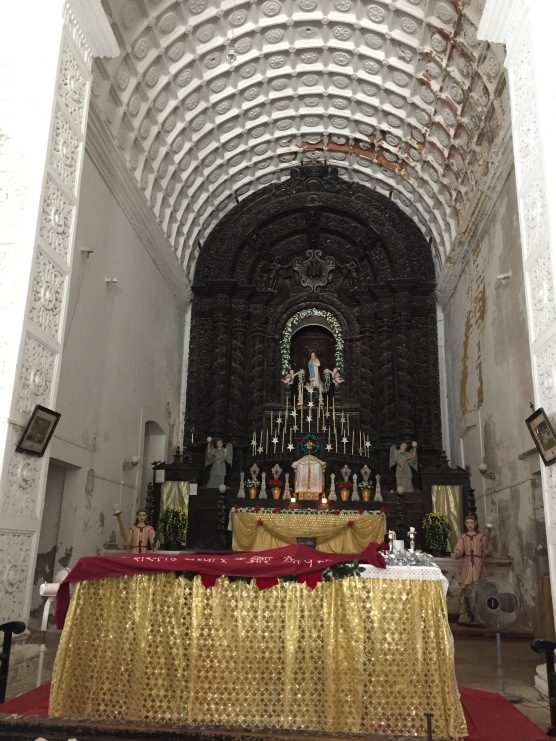 Located in Jallandhar Beach, the memorial of Indian Naval Ship (INS) Khukri is dedicated to all the valiant sailors of this ship who died during the Indo-Pakistan war in 1971. The memorial is a scaled-down replica of the ship inside a glass casing. Khukri went down with her crew of 18 officers and 176 sailors a few miles off the coast of Diu, when a Pakistani submarine fired a torpedo at her. Captain Mahendra Nath Mulla chose to go down with his ship and was posthumously awarded the Maha Vir Chakra.

The replica of the warship inside the glass casing

The story behind INS Khukri

I thought I was seeing coconut trees but I did wonder why they had their trunks fused together. Several coconut trees seemed to be growing out of a common trunk and diverging in various directions. I also noticed an oval fruit hanging in bunches on top amidst the dense green foliage. These were definitely not coconut!

It was only on my way back from Diu that I questioned our cab driver and got to know that these are Hoka Trees and that they are unique and found only in this part of the country. Hoka seeds are used for preparing a local alcoholic drink known as Tadi. The soft flesh inside can be eaten raw.

Hoka Palm Tree or Hyphoena indica is a native of the Nile valley in Egypt and is also known as Doum Palm or Gingerbread Tree.

Diu is a great destination for a quick weekend refreshing getaway!

17 thoughts on “Picturesque Diu – Other Attractions”