When we spent a few hours at Wayanad…

Wayanad conjures up images of lush green hills, terrace cultivation, tea gardens, and fresh spices. It’s a tiny little getaway located in the north-east of Kerala. We were at Kōḻikōḍ one weekend, when we decided to drop by Wayanad on our way back to Bangalore. Wayanad would anyway fall on the way and that very conveniently suited us. Our intention of stopping by Wayanad wasn’t the lush greenery though. It was the prehistoric rock engravings of Edakkal Caves, believed to have been incised between 4000 BC and 1000 BC, that interested us.

Situated about 4000 ft. above sea level Edakkal Caves can be reached through a flight of very steep man-made stairs. Edakkal literally means ‘stone in between’ as the cave is believed to have been formed by a big stone that fell in between two giant rocks. The flight of stairs up to the cave wasn’t easy and left us completely breathless. It was a Sunday and the place was exceedingly crowded, which only added to the difficulty.

The stairs start at the entrance of the cave 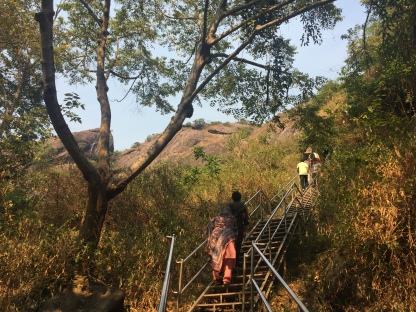 The stairs get steeper

The petroglyphs, however, made the climb worthwhile. There were human figures, animals, trees, wheels, geometrical symbols, etc. Such amazing creative expressions of man left us spellbound. We wondered what a test of patience and perseverance it must have been! All these figures haven’t been completely deciphered yet and are invaluable assets to archaeologists.

As we drove away from Edakkal, we went to another place nearby, called Phantom Rock. It’s a metamorphic rock that supposedly resembles a human skull. We didn’t quite find the rock, instead landed on a tiny little lake that appeared to be cut out of the rocky surroundings. Needless to say, the lake with it’s stillness and moss-green water made us more than happy.

The view from above (PC: Soumyaroop Chatterjee)

The view down below

On our way back to Bangalore, we passed through Bandipur National Park, which falls in NH 766. It’s a stretch of about 10-15 Km. (just assuming, I don’t know the exact distance). As one might expect it was a beautiful stretch with jungle on either side of a straight tarred road. No vehicle is allowed to stop in the forest. If you’re lucky you may spot an elephant. We weren’t lucky enough but monkeys, spotted deer, bisons, and wild boars delighted us sufficiently.

We had crossed Bandipur on our way to Kōḻikōḍ too but that was early morning and we hadn’t seen any animals then. Moreover, we were really sleepy after having to wait for 2-3 hours in the car as vehicles are not allowed between 9 PM and 6 AM through the forest.
[So engrossed we were looking out for animals that we clicked no pictures.]