Our initial excitement of traveling in the yellow-coloured shared Tata Sumo was now replaced by impatience. It’s been an hour since we boarded and the driver was waiting for 9 more passengers. Having seen these typical yellow Sumos from early childhood, it felt somewhat surreal to be seated in one. Another 30 min passed by and no other passengers arrived. These Sumos pack 12 people in one go and are the primary mode of commute to Shillong for villages located in the outskirts.

I was with my sister and we were off to Mawlyngbna. It was a Saturday and we had made the plan just 2 hours back. We were already late and could wait no longer, so we decided to pay for the rest of the 9 people and asked the driver to start – Rs. 100 per person it was.

At about 75 Km. from Shillong, Mawlyngbna is a scenic village in East Khasi hills, nestled atop a hill overlooking the Bangladesh plains. It shares space on the hill with three other villages – Lawbha, Mawtepiew, and Umtyllun. Locals say Mawlyngbna is a rain-blessed village. Not surprising. It’s just 15 Km. away from Mawsynram, the wettest place on earth. Besides waterfalls and natural springs, this village is home to the endangered unique predaceous pitcher plant (Nepenthes khasiana). Most importantly, Mawlyngbna occupies a coveted place on the geological map because of remarkable fossil imprints. 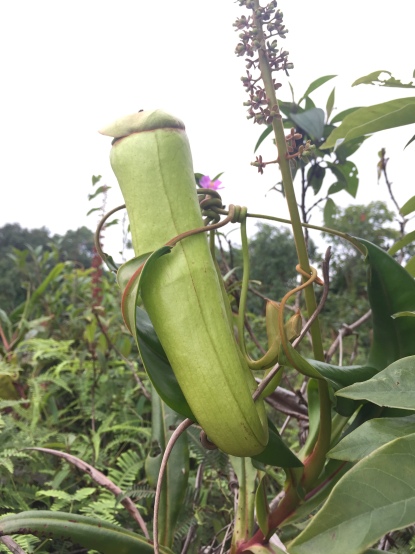 Pic 3: A Pitcher with the lid closed

We arrived in the village at around 2.00 PM in the afternoon after an amazing drive through lush green bountiful hills which played hide and seek with the clouds that sometimes appeared from nowhere whitewashing everything all around us. There’s a lot for one to do at Mawlyngbna – trekking, kayaking, canoeing, fishing, camping, and so on.

Here’s an account of what we did at Mawlyngbna accompanied by our guide, Chest Pdah.

Um Diengkain and Ar Phalat are the two waterfall treks we did at Mawlyngbna.  I have written an elaborate post on the two and will not get into the details once again. You can read it here.

We had started our Mawlyngbna trip with Um Diengkain waterfall, where my sister had a slip and hurt her arm. It didn’t seem to be too bad at that time but eventually it limited our experiences to a very large extent as we had to curtail our original plan.

Walking up to Bangladesh Viewpoint

It was around 4.30 PM when we were back from Um Diengkain. It was too late to trek Ar Phalat, so we settled down for some sha dood (milk tea) and jingbum (snacks) at a Kong Shop in the village square. Thereafter, we took off on a village stroll. A large field where young boys were practicing football, a bunch of playful children laughing and giggling just outside a village home, a few cows and goats here and there, a local bus loaded with people going to the next village  – some things that I recall now.

Somewhere up in the hill we noticed a place that looked like a viewpoint. We called up Chest and asked him to take us to the viewpoint as we weren’t able to figure out the route. Chest was himself unsure and took us up the hill through sections of leech-infested grasses that were as tall as us. Finally, we landed on a moss-covered pathway that led upto the viewpoint. Surprising that the viewpoint was built but not used even though it had fantastic views of the village and Bangladesh plains.

We spent a lot of time sitting at the roundish and flattish comfortable rocks around Umseiniong River on way to Ar Phalat waterfall. My sister’s arm pain had worsened the night before and we decided to take it easy. The situation also led to my cousin sister and brother-in-law (BIL) coming over to Mawlyngbna all the way from Shillong to pick us up. As we waited for them, there was no better way to spend time than at the quietude of Umseiniong River with nature as our only companion. However, after about an hour we realized that we had some more time before they arrived. My sister started feeling better too – the Khasi traditional massage oil had done its trick.

We decided to go and visit a place called Split Rock, which was located at Mawsiangjroi, a few kilometers away from the village. And, off we went hiring a local taxi.

Split Rock turned out to be unique and extraordinary. It’s a huge rock split into two from top to bottom. So, two flat rocks sat parallel to each other separated by about 2 meters. The two rocks are as high as a 4-storied building. One can trek through the narrow passage between the two rocks that leads to a very narrow cave.

We maneuvered our way through rocks and boulders towards the narrow passage and landed at a place where we had to climb down a ladder. The ladder was slippery due to the rains that had been happening during that week. Climbing down didn’t seem like a great idea and we decided to give it a miss. 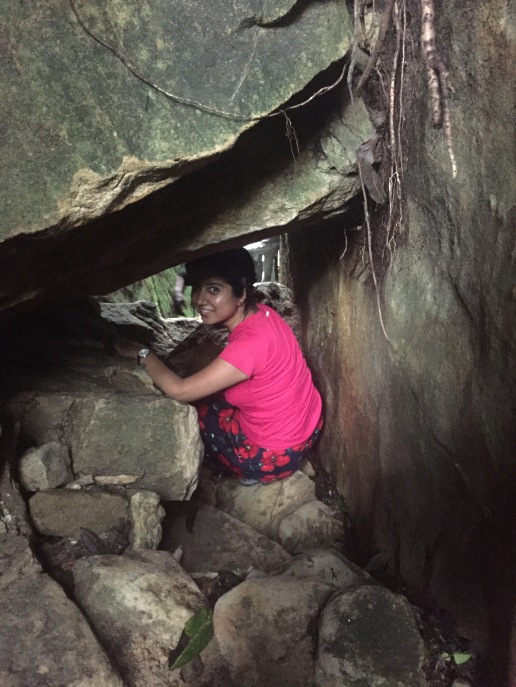 Pic 12: Precariously passing through huge boulders towards the base of the Split Rock

Pic 13: The ladder that takes one down to the base of the Split Rock

Besides Split Rock this place had a viewpoint known as Thalaw viewpoint. It’s a picturesque viewpoint with greens of all shades, clouds floating down, and the Thalaw village perched somewhere in the hills amidst the greenery.

Umakhakoi is located somewhere near Split Rock. However, BIL and cousin sister had arrived at the village by then. We went back to the village and came back to Split Rock and Umakhakoi with them. The multiple bowl-shaped holes at Umakhakoi fascinated us much more than the lake itself. An unending stretch with numerous water-filled holes greeted us as soon as we entered the area.

Google says this type of geological features are called ‘Potholes’. The formation of these are associated with the flowing of water over an uneven surface of limestone for prolonged periods. As the water percolates inside tapered sections, the centrifugal force of water leads to the formation of these natural sink-holes. Kayaking and Canoeing are common activities at Umakhakoi. However, we indulged in none.

And, here’s an account of what we missed at Mawlyngbna and why we need to go again.

We missed the most significant aspect of Mawlyngbna – the fossils embedded in the boulders, remnants of a time when the entire area was under sea. The fossil trek through jungles, streams, and waterfall leads to a place called Ka Iew Luri-Lura. This place has rock impressions that resemble animal footprints. Khasi folklore has that these footprints are from a time when animals could talk and they would come to this place to trade with each other and with fellow human beings.

Mawlyngbna has fascinating lime stone caves where stalactites and stalagmites abound. However, the caves can be visited only during winters.

Other activities at Mawlyngbna includes ziplining, snorkeling, and angling. One can also indulge in midnight football matches under full moon, which takes place in the village sometimes. Then there are amazing river treks for the Adrenalin Junkies. One can also experience the local culture, depending on the time of visit. The community holds local dances and displays their handicrafts at a certain time of the year.

An interesting thing that I got to know was that the liquid inside some of the pitcher plants is edible, one needs to select young pitchers and those whose mouths are closed by the flap.