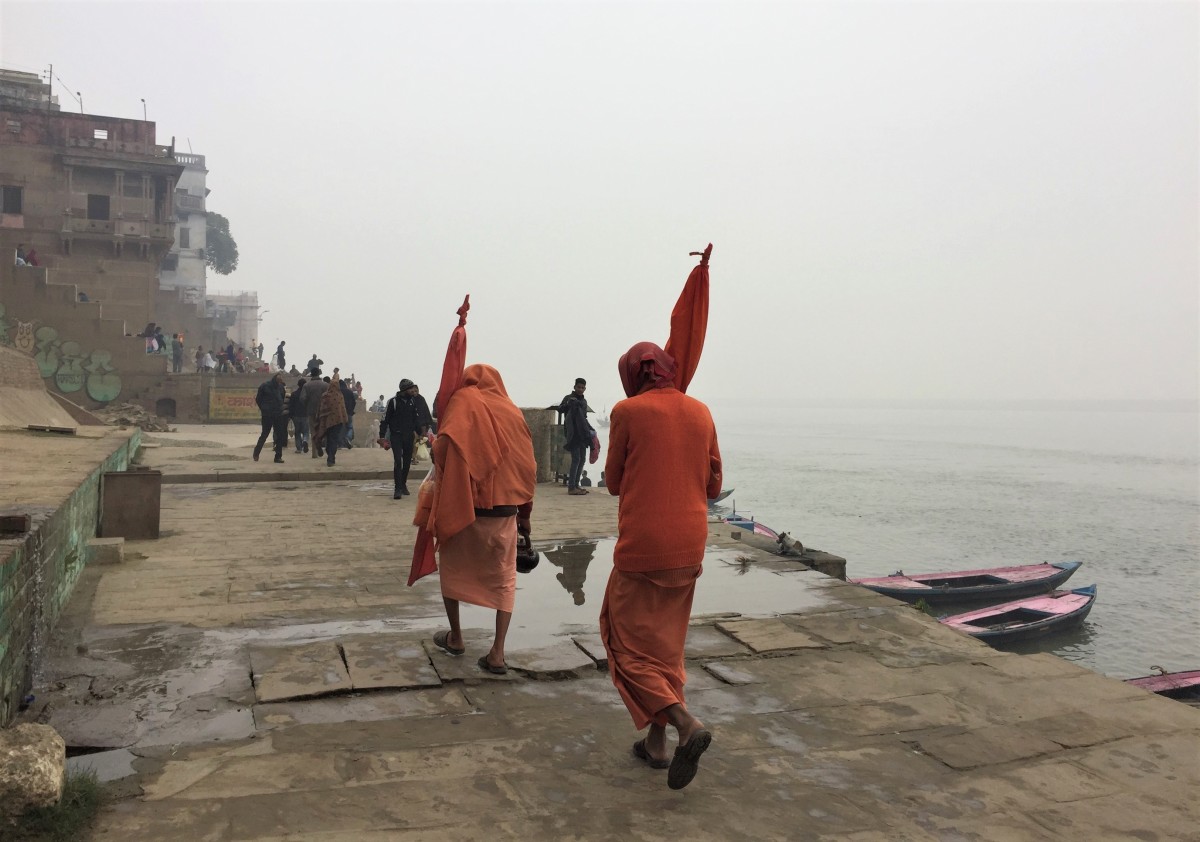 “Myself Pradeep Sharma, no wife, no children, no mummy, no papa…”, he effusively stated while extending his hand for a quick handshake. “Chaye pee ke jaiye”, he continued “humari taraf se”, pointing towards the tea shop right behind him. (Have a cup of tea, it’s on me). I politely refused, while my sisters giggled right behind me.

This was one of the many sadhus we came across in the ghats of Benaras. The sadhus were of all kinds – some in their own world, some wandering aimlessly, some looking to earn a quick buck, some asking for alms, some irritated and upset, some busy performing pujas and yagnas.

I will narrate two funny encounters.

We were passing by Darbhanga Ghat towards Dashashwamedh Ghat when we noticed this man talking to a family of 4-5 people. It appeared like they were seeking a solution to some problem and our man was happily obliging. We paused a few meters away watching him. The ash-smeared skin, the disheveled looks, the unkempt beard, the red dhoti, presented us with the perfect photo opportunity.  By now, we had learnt that if you approach any such person for a photo either they outright refuse to oblige or ask for money in lieu of a photo. But this time it turned out to be different. 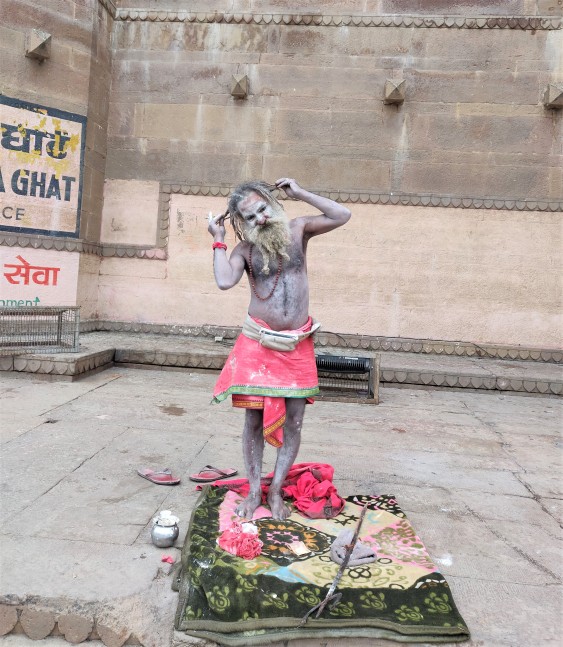 The man called us and said that we could freely click pictures of him if we wanted, he wouldn’t mind, and that he doesn’t want money in return. Having seen tourists in plenty, he had guessed our intention.  After the family left, he posed for us in various ways. His enthusiasm was hilariously enjoyable.

The next day, we happened to pass by the same area when we saw someone smiling at us. It took us a while to recognize our jovial sadhu as he was wearing a woollen cap and a sweater. Though we said nothing this time, he offered to pose with us. We were busily headed somewhere but he insisted and wouldn’t take no for an answer. We just had to agree to his enthusiasm. In return, he took off his cap and sweater in the cold winter morning and posed in many different ways making sure all three of us had separate pictures with him. It didn’t matter whether we wanted a picture or not. 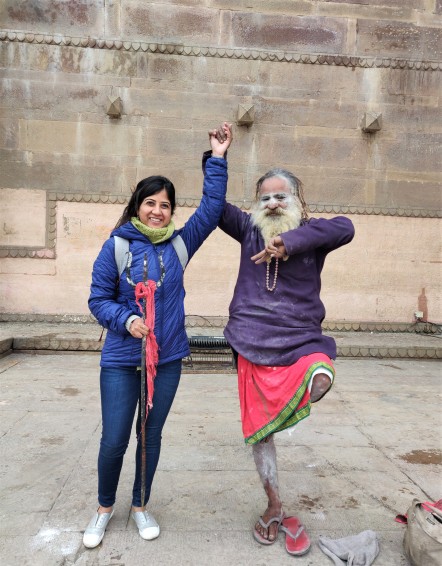 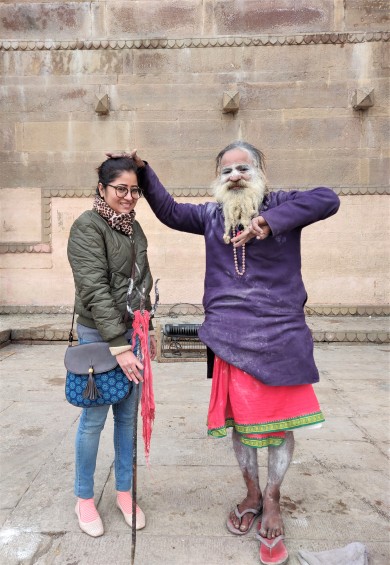 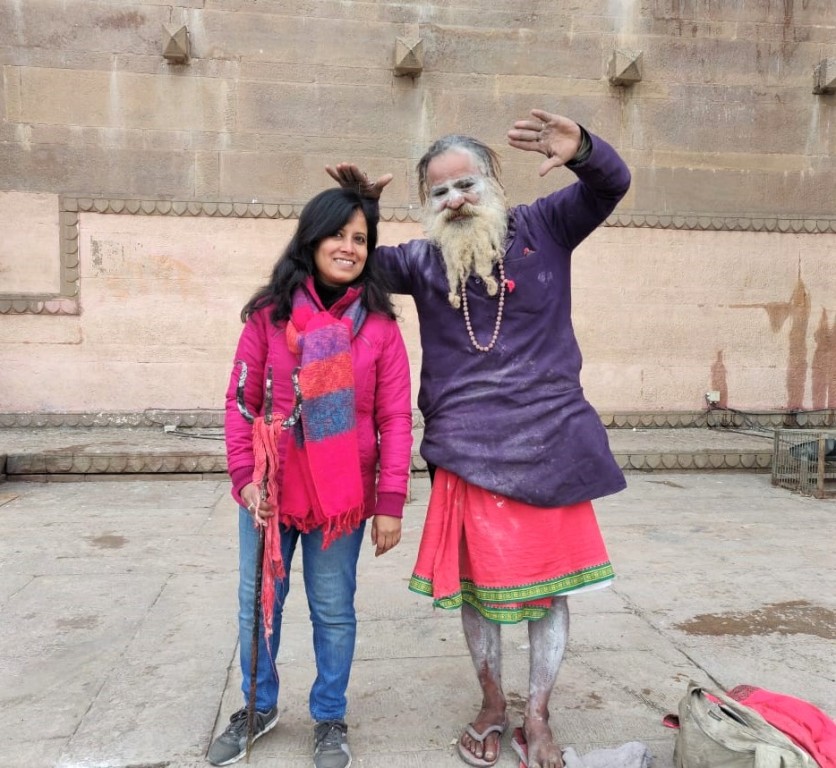 Happy with his earnest enthusiasm, we offered him a fifty rupee note, which he readily accepted.

We were standing at the turning of a narrow alley waiting for the doors of a nearby temple to open for the evening. That was when I noticed a plump pot-bellied man with a flowing white beard and a red/orange robe walking towards us through the alley, which was empty until now. I alerted my sister, who was creating a photo series on sadhus. My sister jumped into action forgetting to be discreet. 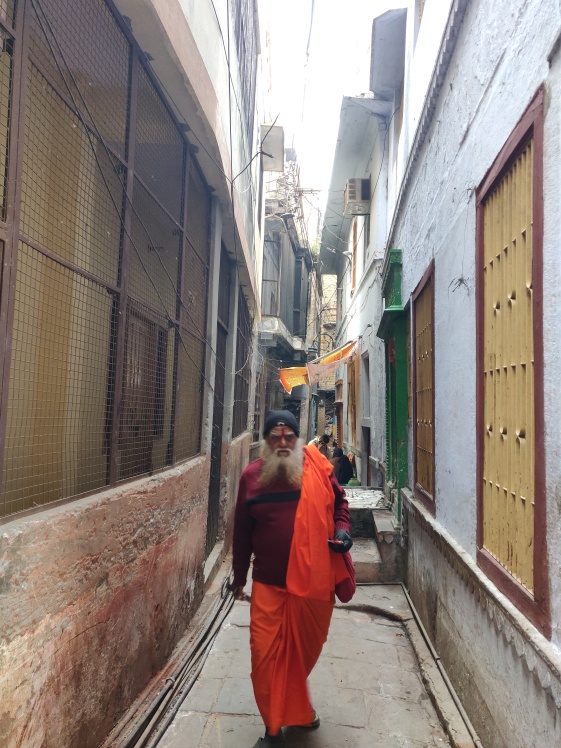 As expected, the man asked for money the moment he approached the turning where we were standing. We looked away pretending not to listen. At the same time a small boy appeared from the neighbourhood and started teasing him – “Sadhubaba, Sadhubaba, zara Hanuman Chalisa toh padke sunao!”, (Sadhubaba, why don’t you recite the Hanuman Chalissa for us!).  The man laughed boisterously and playfully brandished his stick as if to hit the small boy.

Suddenly the atmosphere became light. Digging into my pocket, I found a ten rupee note that I handed over to him. As if obliged by this gesture, he recommended a weird remedy for some unknown problem. We were supposed to take a peda (an Indian sweet) every Saturday, encircle the same around our heads three times and then feed it to a dog. This antidote to some non-existent problem was hilarious and led to a lot of playful bantering. 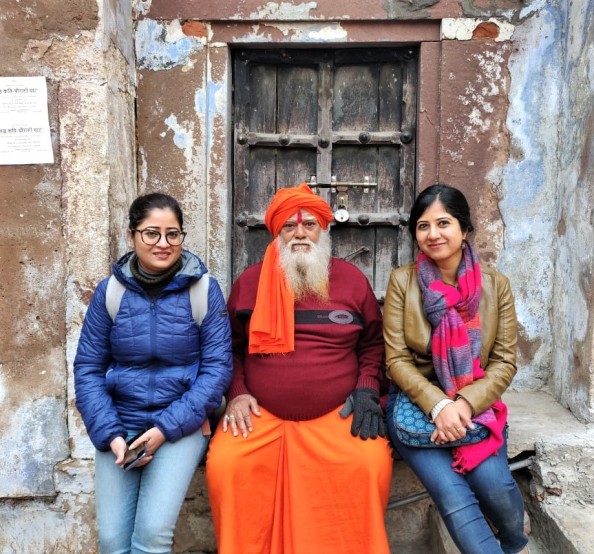 Later in the day, we encountered the same sadhu once again and this time we noticed he looked a lot like Santa Clause. We had to click a few pictures. 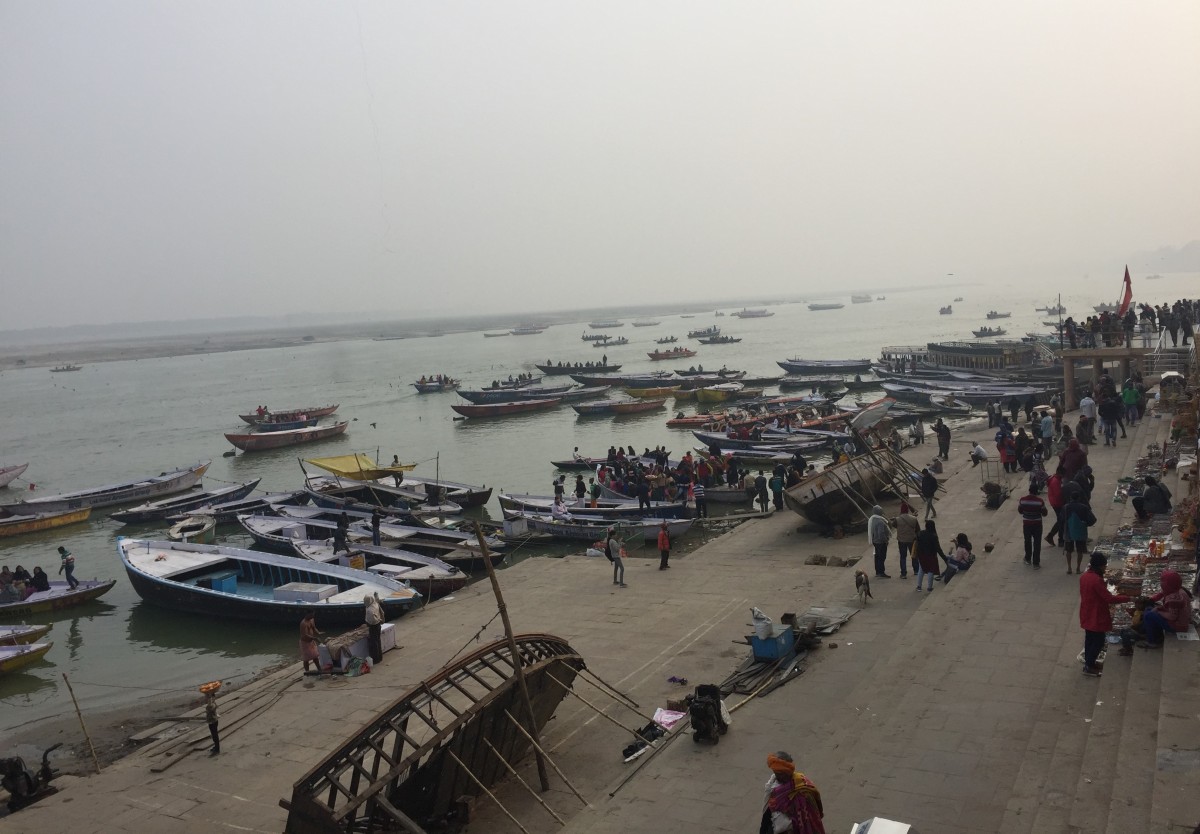 No, this isn’t my kind of a place! Overcrowded, untidy and utterly chaotic – I should be feeling disquiet, anxious, edgy, and uncomfortable. None of that was happening. Instead curiosity and fascination was overtaking me. The energy of the place was seeping into me. I muttered something and my sister said – Welcome to Benaras!

Also known as Banaras, or Kashi and more popularly Varanasi is one of the oldest continuously inhabited cities in the world.

My Varanasi sojourn started with my phone going totally out of service right from the time I stepped into the airport and it remained that way till I left the city. I was hardly concerned, however, as I knew I wasn’t alone. My sister was arriving an hour and a half later from Kolkata. [Well, my cousin sister but hailing from a joint family we don’t prefer to use the term cousin]. I was meeting her after 4 long years and my anticipation knew no bounds. I made sure to occupy a seat somewhere between the departure gate and the baggage carousal section so that I wouldn’t miss her. She would have no idea that my phone wasn’t working. 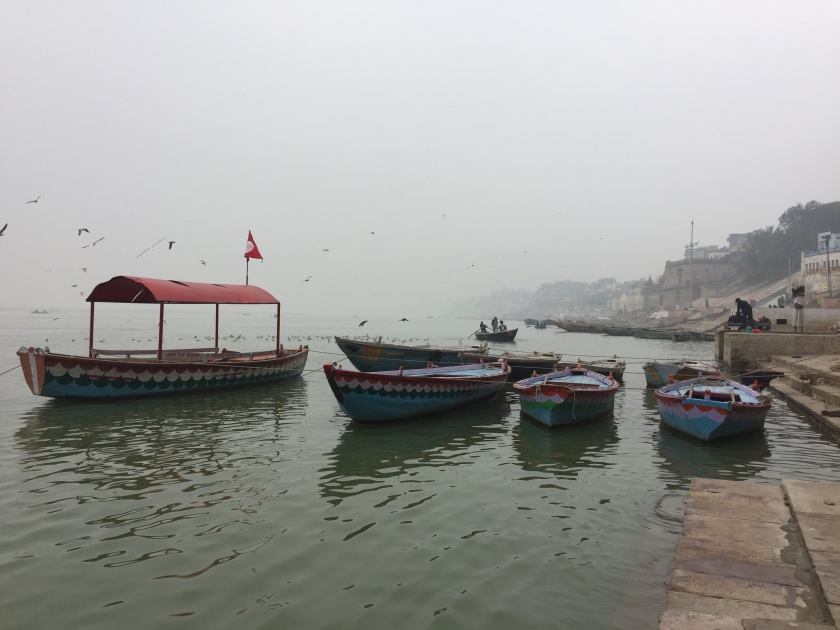 The taxi we booked from the airport to our place of stay dropped us somewhere in the middle of a chaotic marketplace. From there we were guided through lanes and bylanes to Chatterbox Hostel at Bangali Tola, our place of stay for the next 4 days. The narrow unkempt lanes were quite a shocker for me even though I was mentally prepared after having heard/read stories about them. I even doubted my decision of booking a place of stay in Bangali Tola, which I knew was an area marked by these network of narrow lanes and bylanes.

Soon I would realize what a good decision that was. I will have to write a separate post on the lanes. 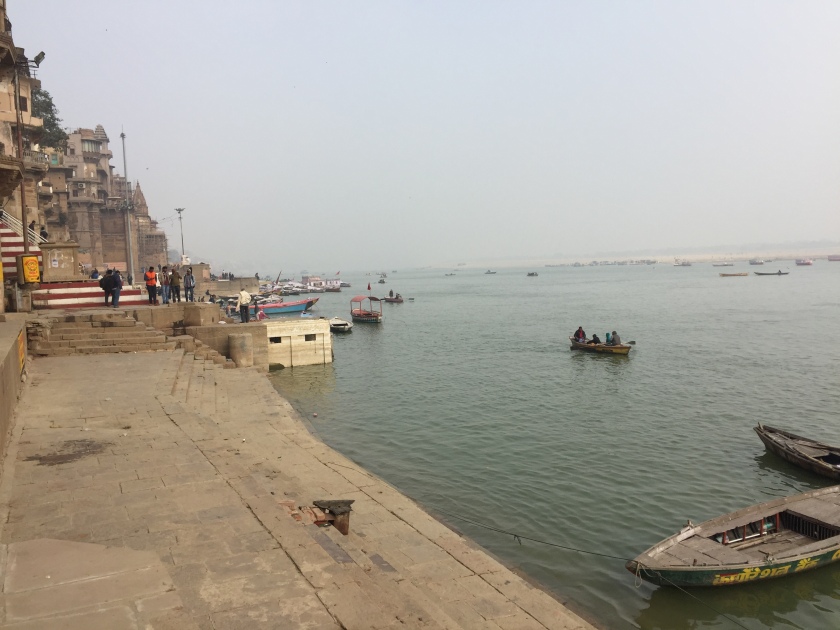 It was around 9 PM, when we arrived at the hostel. We had booked a separate room for ourselves. For now, it was just the two of us till my sister from Bangalore joins us two days after. Dumping our bags, we stepped out immediately for dinner and a quick exploration of the neighbouring area.

Walking through the narrow lane, dodging cows and street dogs, we settled for a restaurant that got us interested just by the way it was decorated with things like cotton sarees and jute artifacts. As we waited for dinner to arrive, we decided to grab tea from a tea shop that was bang opposite. We were seated outside, and the narrow lanes meant all we had to do was extend our arms to the tea shop to get our tea cups.

The tea shop was the untidiest I had ever seen. The walls were black with permanent deposits of soot and didn’t look like it was ever painted. The pan where tea was prepared never seemed to have been washed. It was, however, the best tea I ever had. Thereafter the tea shop became a regular visit for us over the next 4 days. 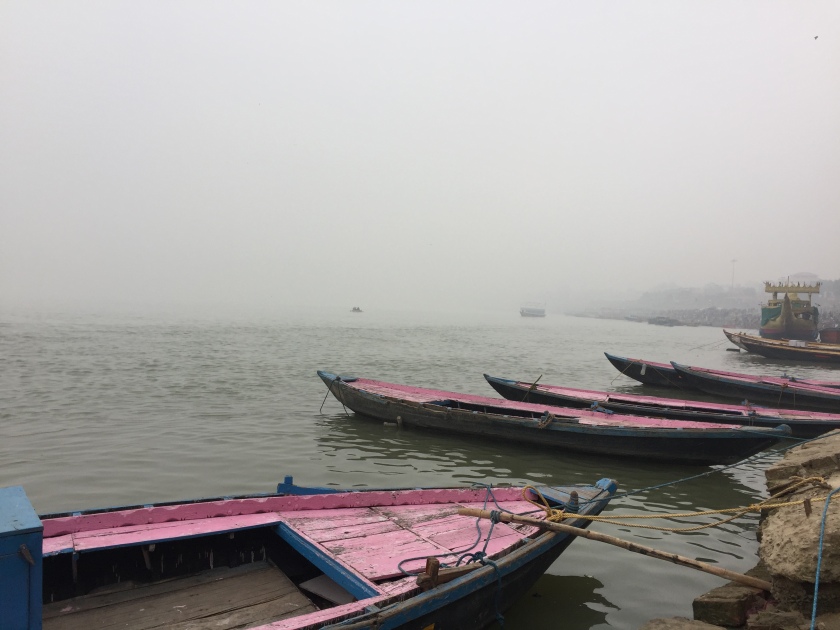 After dinner, a 2 min walk led us to Ganga Ghat. It was quite late and we had no clue which ghat we were at. My first sight of River Ganga in the quietude of the night was nothing but magical. Peace, tranquility, and happiness is all I remember. It was freezing cold with North India being swept by a cold wave at that time. There were very few people around, some played badminton, some seated in a circle around a small fire that they would have created, some walked around, some simply huddled in a groups busy chatting away, and some were alone staring at the river.

Ganga looked calm and beautiful with hundreds of colourful boats tied along the shore. 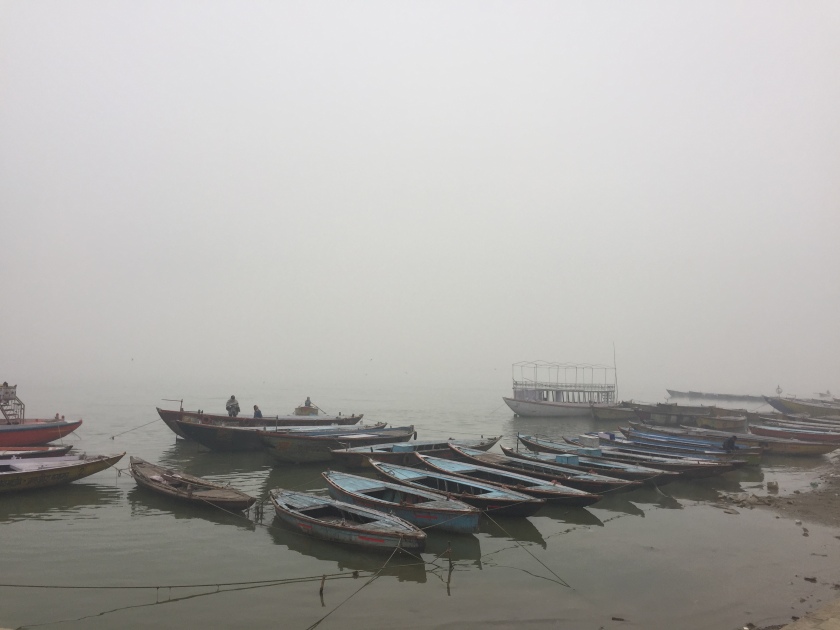 We walked towards one side and in another 2 minutes arrived at Dasaswamedh Ghat, the oldest and the most important ghat at Varanasi. It was 11.00 PM as we settled down finding our own corner in the largely empty ghat. Wondering how much the ghat might be buzzing with activities during Ganga Aarti in the evening and also during other times of the day, we went on talking about our lives and catching up on the millions of things we had to share with each other. 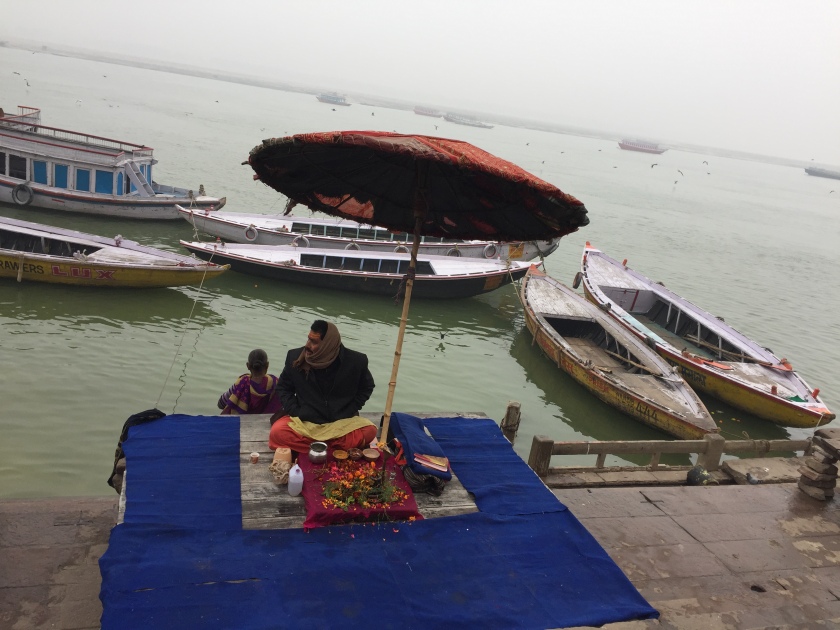 Soon we started noticing several people kneading dough with atta or wheat flour on the ghat floor in various places across the ghat. My sister and I went about speculating and making our own assumptions on the purpose of their activity. Curiosity got the better of me and I headed towards three young men who were chit-chatting and kneading as a team. I learn they do this to create small balls that they throw into River Ganga for feeding fish. And, why do they do this? To feed a living creature before retiring for the night. This ensued an interesting discussion in that cold December night with these young men – mostly in their 20s.

My mind, unheeding, went into an unfair comparison of the seemingly uncomplicated lives of these men with their counterparts in my city of Bangalore where the corporate world swallows all these simple pleasures of life.