Mawlyngbna (pronounced maw-lyn-bana) is a quaint little dreamy village nestled atop a hill overlooking the Bangladesh plains. Located in East Khasi Hills of Meghalaya, about 75 Km. from Shillong, this picturesque village is all about adventure activities from trekking to canoeing to kayaking to fishing, and camping.

Through the Jungle to Um Diengkain

Passing through a dusty track, we entered a jungle – a dense jungle with huge butterflies of myriad colours, a damp forest floor covered with narrow and broad leaves, tall aged trees with trunks wrapped in layers of moss, multitudes of ferns of various dimensions, and every such thing that you can imagine only in a rain forest. The constant calling of cicadas added to the charm, making it even more enigmatic. After a while, the forest gave way to a semi-barren land that was covered by patches of grass but was devoid of trees.

Soon enough, the sound of the cascading water reached our ears. A few more steps and the waterfall made its elegant appearance. From far it looked like a dainty white sheer curtain amidst the greenery. Approaching closer, we alighted with ample caution through a set of rustic precarious rocks that served as steps to go closer to the waterfall. Up close it looked forceful and was not the least dainty as we presumed. The pool of still water surrounding the waterfall was emerald green where we found locals quietly fishing away. Other than them, there was nobody else. We had the entire waterfall to ourselves.

Our guide, Chest, asked whether we wanted to go closer. That would entail walking through a set of moss-covered slippery stones. Being the cautious adventurer that I am, it wasn’t something I was very keen about. As always, my sister played down my concern and we went ahead. We were so close to the waterfall now that sprays of water landed on us every now and then, drenching us quite a bit.

On our way back, a small glitch happened – my sister slipped on one of the mossy rocks and hurt her arm. It did not seem like too big a thing at that point of time as she was able to move her arms freely. There was an obvious pain but that was manageable. The pain, however, multiplied manifolds later that night. So much so that we were all set to leave Mawlyngbna much before our planned departure.

Upto the Mouth of Ar Phalat

Ever traced the course of a flowing water and landed up to the mouth of a waterfall? Well we just did. I had read about such treks but experienced one for the first time and it was just as exciting as it seemed. We were almost not going for this trek to the mouth of Ar Phalat waterfall as the pain in my sister’s arm had aggravated the night before. It was the traditional Khasi oil massage that came to rescue. In the morning, she was better though the arm still did hurt. After breakfast, we decided to go ahead with the trek. We walked through the lanes and bylanes of the village towards our destination. Chest and I walked ahead while my sister walked slowly trailing way behind us.

Soon we found ourselves walking over moss-covered stones alongside Umseiniong River. One would imagine these rocks to be slippery, but they weren’t. Most of it was dry and didn’t feel very difficult to walk on. Some sections were tricky though and we had to be cautious with our footing. As expected, this trek is possible only during certain months of the year when the water level is low. The mouth of the waterfall was a huge flat rock that just drops to the plains of Bangladesh. There is no way beyond the rock and no option other than to retrace our path. The water from the river was passing down only through one side of this huge rock. During monsoon, the gushing waters would cover the entire surface of the rock.

As we stood at the edge, gazing at the Bangladesh plains, I wondered about the water most likely flowing into River Padma. The water doesn’t change as it flows from one country to another. The flowing water couldn’t care less about the imaginary boundaries we humans have marked out on earth.

With nobody around, it was blissful time with Mother Nature. On our way back we spent a lot of time sitting beside the flowing water as you see in the featured picture.

The green all around refreshingly fed my lungs and brain. I felt alive! I hadn’t seen so many shades of green anywhere before. The green felt pronounced and took me by surprise as I was just back from Sikkim and the surrounding greenery at a Lepcha Village had made me feel like I was in Amazon Forest.

Once again, I realized how little I have explored my own place of birth, my home – Meghalaya.

Last week I was spending time with my 26-year-old nephew, who is more of a buddy than a nephew and has been so since he was a child. Our meeting in Shillong was sheer coincidental and we got to spend four days together. And, that just had to be super special. Last time we met in Shillong was when he was in school. Thereafter, we did meet a couple of times in Bangalore and Ahmedabad but together in Shillong never happened until now.

On Saturday, aunt and nephew, both passionate nature lovers, decided to go on a day trek. After exploring a couple of options, we settled on the historical David Scott’s Trail. We did a little bit of reading about it and didn’t think it looked much impressive. Nevertheless, we decided to go for it as it was logistically convenient.

Sometimes, you have to be at some place to know what it really is! We were prepared for an ordinary hike but the actual gorgeousness unfolded on the trail.

A Little on David Scott’s Trail

The trail is named after David Scott, who was the first British administrator to be sent to North East India during the British Raj. He operated in and around Khasi Hills for nearly thirty years (1802-1832). The 16 Km. trek is part of the horse cart trail that he had laid down to connect Assam and Bangladesh during the nineteenth century. The complete route was about 100 Km. long and was used to carry goods across tow destinations.

This road resulted in a war between the British and the Khasi, the latter being led by U Tirot Singh, the king of Khadsawphra Syiemship. The Khasis, with their bows and arrows, were hardly any match for the well-trained British soldiers. However, the war continued for four years. The British muskets finally defeated the Khasi forces. U Tirot Singh was captured and deported to Dhaka (now the capital of Bangladesh) where he died on July 17, 1835. U Tirot Singh is still hailed as a freedom fighter and revered in whole of Meghalaya.

Nephew and I connected with Evernold (our guide) and planned the trek. Normally the trek starts at Mawphlang and ends at Ladmawphlang. The former is closer to Shillong and the latter is closer to Cherrapunjee. Ending at Ladmawphlang makes it easier to move over to Cherrapunjee, which most people do. We had to get back to Shillong and hence ending at Mawphlang seemed easier. The usual route starts with 4 Km. downhill, which in our case would be 4 Km. uphill.

As we started our trek from Ladmawphlang, it started raining. Not surprising, we were in Meghalaya and more so at Cherrapunjee. Simultaneously the curtains raised, and the show had begun. The stunning scenery already started revealing itself. It amazed us to think all of this was right there just when we left the tarred motorable road, not tucked away in some remote corner. Soon, we crossed a broken cemented bridge, laid over the river – it’s River Umiam, which remained our constant companion almost till the end of the trail.

Every bend threw up something new. Rolling hills with every kind of green shade; the deep valley; the red and white Rhododendrons peeping out through the greens; the crystal clear waters in the natural pools; the sparkling river appearing and disappearing.

Sometimes the hills were so close that we could distinctly see the wide variety of trees, sometimes they were far away and we could only see the outlines layered into the clouds. Sometimes we were deep into the jungle walking through tall shrubs and heaps of brown leaves laid on our path; other times through cobbled stoned pathways; or just a muddy lane; or a lush green meadow.

The wide variety of ferns, the gorgeous mushrooms, the ugly poisonous toads, the wriggly caterpillars, the brilliant butterflies, the poisonous flowers, and such others were additional wonderment. Such places spontaneously transports me to a world of fantasy making me wonder if I am walking on earth or if I am in some other realm. 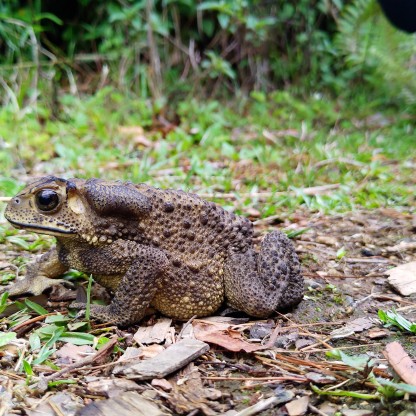 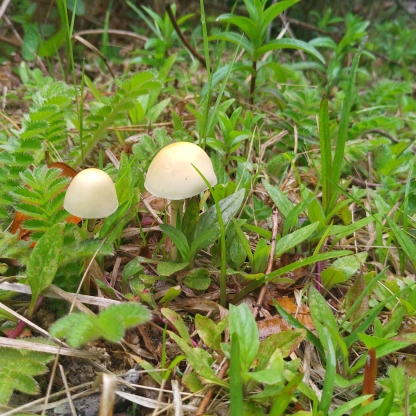 Flowers in the village

A little while after we started walking, the heavens poured but thankfully stopped in about 15-20 min. The weather Gods were good with us for rest of the day as the Sun and the clouds played hide and seek making it the perfect trekking weather. There are four villages in the adjoining areas of this trail, but we passed by only one – Laitsohma. The others are Mawbeh, Pyrda, and Mustep.

While aunt and nephew were having the best of time together, Evernold was adding to the fun by intermittently bringing in entertaining Khasi folktales and stories.

The best part was that there was nobody other than us throughout the trail. We did meet a few villagers on the way. A dog, whom nephew named Bhuralal, followed halfway till Laitsohma and then went back.

The trek ended as we reached Nongrum Village at Mawphlang. I thought to myself – I run around the length and breadth of our country seeking nature’s divine grace but the best of nature’s gift is right here in my very own backyard.

I know, there’s an overdose of pictures in this post but my story will remain incomplete without the one below.