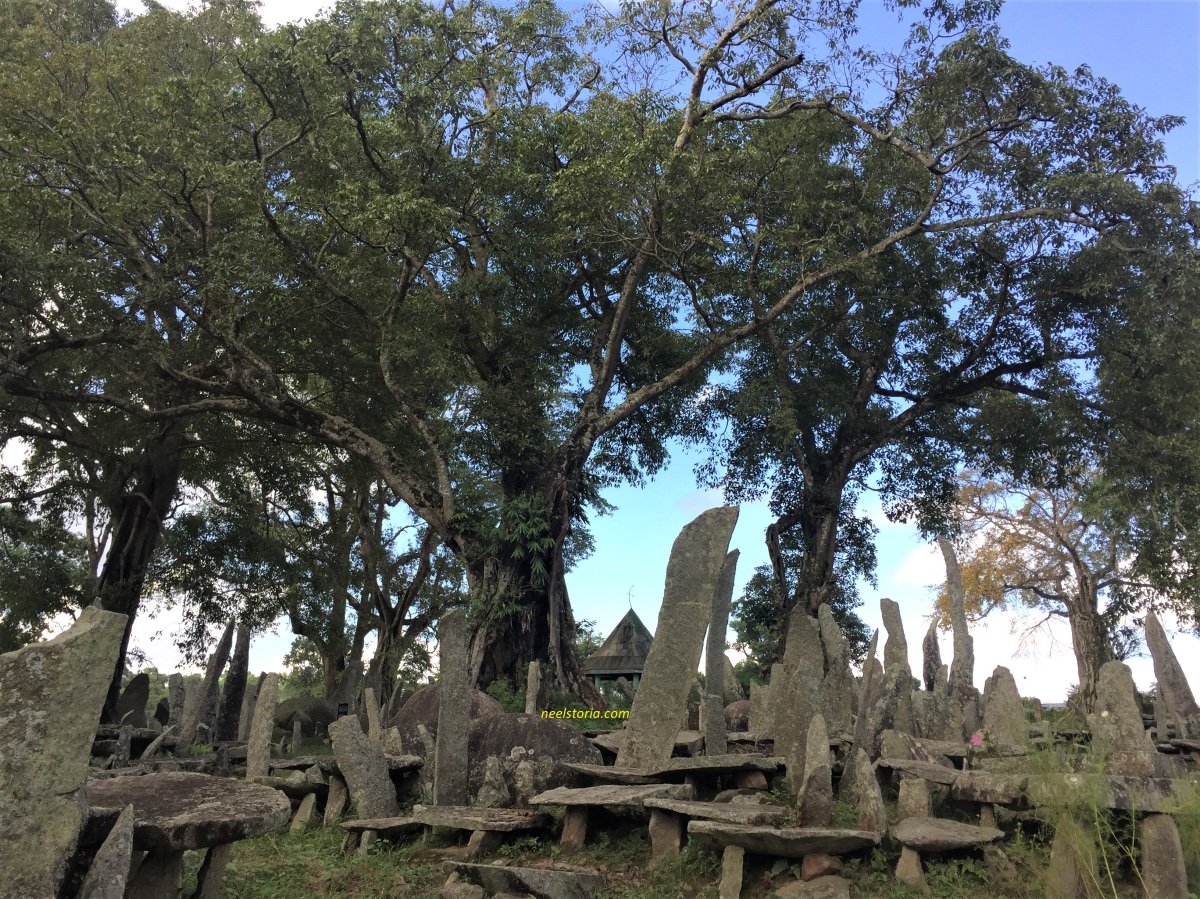 Meghalaya is home to monoliths and megaliths that are spread across the state. They are quite literally scattered everywhere. And, if you take a drive in the countryside, you can’t miss them at all. Whenever I see them, I can’t help but wonder how they would have landed into such positions. Some are certainly manually placed, especially the ones in the city of Shillong. But, what about the others? Those that I see randomly placed in the meadows and hills?

Cherrapunji, in East Khasi Hills, has a monolith park. I would have most certainly seen the monoliths during my childhood, when going to Cherrapunji happened at the drop of a hat. I do not recall an organized park though. Guess, it would have been created recently to cater to tourists. Cherrapunji remains overcrowded with tourists, which significantly drowns the yesteryear romanticism of clouds, mist, and rains.

There is another monolith park in Jowai, the capital of Jaintia Hills. This one had aroused my interest sufficiently because of its historical significance and because it has the biggest collection of monolithic stones in one single area. It also boasts of housing the tallest monolith in the state.

So, when cousin and I visited the temple at Nartiang recently it was quite obvious that we would visit the monolith park too. (Read Here) The park is located just a kilometer away from the Nartiang Durga Temple. We were running late after having spent a good amount of time at the village. Cousin was almost about to drop the plan of visiting the park promising to come back another day. I would have none of it, especially after going all the way from Shillong, and who has seen tomorrow! She agreed after I promised that we wouldn’t spend a lot of time there.

It being the pandemic times, there was nobody around when we arrived at the park. The gates of the park were thankfully open. A prominent plaque and a Meghalaya Tourism signboard at the entrance provided a glimpse into certain historical facts. Most importantly, the monoliths were erected between 1500-1800 AD during the reign of the Jaintia Kings. The menhirs, or the single standing erect monoliths, are locally known as Moo Shynrang (meaning men). The dolmens, or horizontally placed flat monoliths, are locally known as Moo Kynthai (meaning women). The menhirs and dolmens are placed rather haphazardly in the park. Locals believe that each monolith marks a specific event or an individual.

The tallest menhir is about 8 meters high and 18 inches thick. It was supposedly erected by U Marphalangki, a trusted lieutenant in the Jaintia Kingdom, to commemorate his victory in a battle. There’s an interesting legend associated with this menhir. It is believed that Mars were giant sized men with exceptional capabilities. They could perform extraordinary feats and were patronized by the Royal Court of Jaintia Kingdom to defeat the enemies at the battlefield. Some say Mars would have probably been a rank in the Royal Army.

Legend Associated with the tallest Menhir

Marphalangki decided to seek God’s intervention after several failed attempts to erect the monolith. He performed Oomancy or egg divination (methods of using eggs for predicting future). Based on that he interpreted that a human sacrifice is needed to appease the Gods for the stone to stand tall. It being a market day, people had gathered to watch Marphalangki’s display of strength in erecting the stone. An idea struck Marphalangki and he pretended to accidentally drop the lime and tobacco gold container (locally known as dabi or dabia). When a spectator bent down to collect the container, Marphalangki dropped the huge stone over him. That incident is believed to be the beginning of human sacrifice among the Jaintia Pnar community. A practice that was later banned and ceased to exist altogether. (Story courtesy HH Mohrmen)

Legend Associated with the Dolmens and Menhirs

A Jaintia King by the name of Luh Lyngshkor was at a village called Raliang when it started raining. He requested an old woman to give him the traditional bamboo umbrella (locally known as knup). The woman refused saying that the king was a well-built man and could use the giant stone slab at the market to shelter himself. The king went to Raliang market, lifted the stone slab and used it as an umbrella to protect himself from the rain. He carried the stone umbrella, and reached Nartiang (Nartiang was the summer capital of the Jaintia kings). After that incident, Raliang market was shifted to Nartaing and that market continues to remain at Nartiang.