It was a Sunday and I woke up to a bright and beautiful day. An ideal day in Spring. “No wonder I love Spring,” I thought to myself. Such kind of days are rare and special in my hometown, Shillong, where rain clouds are always lurking around the corner.

A Sunday like this must inadvertently be associated with countryside long drives. And so it was! As always, Brother-in-Law (BIL) and I set out on our tiny little adventure. Both of us are perfect partners in crime and totally in sync when it comes to exploring nature.

BIL picked me up and we set out without any particular plan or destination. Very soon we realized that the city was left behind and we still hadn’t decided the plan for the day. BIL didn’t waste time in expressing his wish of driving towards West Khasi Hills. The perfectly tarred roads of the National Highway connecting Shillong-Nongstoin-Tura is one of BIL’s favourite long-drive destinations.

Not surprising as the undulating road winds through green hills dotted with Pine trees, the Kynshi River appears in some places, tiny colorful houses of the sporadic pretty villages add to the overall eye-catching surroundings. The ride serves for a relaxing and soothing experience.

We had heard about a village called Mawphanlur, located somewhere around West Khasi Hills that boasts of seven lakes tucked away in gorgeous green valleys. Decision taken and Mawphanlur it was! The place was sealed and closed.

Located around 95 Km. away from Shillong Mawphanlur is little known amongst the tourists that throng Meghalaya. In fact, West Khasi Hills does not fall in the usual tourist circuit and that made it just perfect for us. The drive through the highway, as expected, was a pleasure to the senses – perfectly complemented but the warm sun and blue skies. The sparkling tarred road snaked through the gorgeous surroundings as BIL maneuvered his car rather skillfully.

I was totally lost in the surroundings when I suddenly realized the road was going uphill and was much narrower – well we had left the National Highway and was on the road to the village. The narrow road was perfectly tarred and that was an unexpected but pleasant surprise.

After a while we were treated to verdant rolling hills, quaint cottages, narrow lanes and several water bodies. We had arrived at Mawphanlur. Clouds had gathered by now and there was a nip in the air. I made sure to take my jacket with me as I alighted from the car.

I would describe Mawphanlur as utterly refreshing, not only because of the greenery but because of the complete lack of usual tourists and all the associated paraphernalia of shops, hawkers, etc. There were a few locals though who had come over to explore the place just as we did.

The Traveller’s Nest guest house with its three cottages was a complete surprise for us. Had we known that Mawphanlur has a guest house, we could have planned to stay back and would have had more time to explore Mawphanlur and its idyllic surroundings. We spent close to an hour enjoying the serene surroundings before heading back. On the way back we had a late lunch at a local eatery – in a Kong Shop. 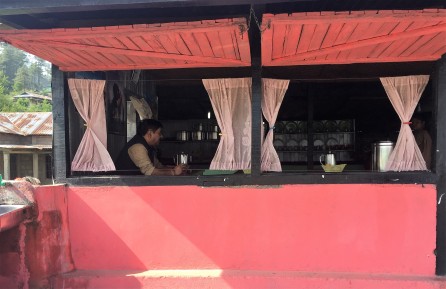 Pic 6: The cute little Kong Shop where we had lunch

An Arduous Climb Alongside Nohkalikai Waterfalls

We climbed, climbed, and climbed along! Will this ever end! At every turn, I hoped to see some flat land but there wasn’t any and every turn only revealed another steep climb through the same set of rugged, uneven rocks. I glanced at my watch and it was 2.30 PM. That means we’ve been climbing constantly for 3 hours now. “Just 10 minutes more to the top”, said Droning, our guide.  I knew I couldn’t take his word for it. As a 15 year old village boy, he can easily do it in less than that time.

We were tracing our way back from Nongriat after visiting the Double Root Bridge and the Rainbow Falls. The usual route is a pathway constituting 3600 concrete steps but we were on a different route. The path where we were walking, rather climbing, was right beside Nohkalikai Falls, which happens to be the tallest plunge waterfall in India, falling from a height of 1115 feet (340 metres).  And, that very well explains the steep climb. It was like walking up a vertical wall of that height.

We got carried away when we heard about this route and embarked upon it without putting much thought onto it. To top it, we had missed breakfast and had hardly eaten anything. Not just that, we ran out of water pretty soon. And, I for one didn’t have a single sip as I was saving it for my cousin, who needed it more.

We had no clue about this route and got to know about it from some travelers the night before at Nongriat. The jungle route appealed to us and we had decided in an instant to go through that route instead of the usual concrete pathway. A quick chat with Droning to gauge the safety of the route with respect to wild animals and if it would be slippery was enough to seal the deal. Droning, however, miscalculated our capability and estimated that it would take us 2 hours to reach the top. He had said it takes him an hour, so by our standards it would be 2 hours. How wrong he was!

Also, it was only later that we discovered people climb down the route but seldom climb up. It’s not a very popular route and many people don’t know about it. Backpackers, trekkers, and adventure seekers walk down this route to go to Nongriat and then go back up through the concrete pathway.

Rajat and Ashwin, two of our newly made acquaintances had joined us too.

The jungle was alluring and too glamorous for words! The initial 2 hours was simply fascinating. I felt the five of us were like Enid Blyton’s Famous Five unearthing a secret trail attempting to solve a dark and deep mystery. Tall trees and thick shrubs adorned either side of the steep rustic moss-covered stone steps. The sun passed through the miniature openings in the thick foliage making varied patterns on the path we walked. The entire pathway had a generous dose of Bay leaves scattered all over.

Every view appeared unique yet the same, all at once. Once in a while we came across these huge and delicate spider webs housing an elegant spider, proudly sitting right at the center. Gorgeous velvety butterflies fluttered every now and then spreading a blast of colours across their path. Some were tiny while most were really big, almost the size of a man’s palm.

A sweet jungle fragrance filled the air and our eyes feasted on multiple shades of green, sometimes interspersed by few browns.  Wild flowers of myriad vibrant hues scattered here and there were a source of constant delight uplifting our spirits and minds. I felt transported to a different realm. I wished I could take this jungle home and make it part of my everyday life but I couldn’t and have to make do with potted plants in my tiny little balcony.

There was nobody other than us in the trail making it even more enigmatic. The only people we met was a British couple going down the path towards Nongriat. They had come driving all the way from England and were exploring the remote corners our country.

As we started walking, we found plastic bottles, chips packets, chocolate wrappers scattered all around. Though this path was less littered compared to the concrete pathway but it was disturbing nevertheless. Even a place like this, which is not touristy and less frequented was not spared. Initially, we just exchanged discontent about this among us.

Soon the discontent got the better of me and I started collecting them in a spare bag I had and by the time we were done with the climb, my bag was full and there was no more space in it. It was a great feeling to find the British couple doing the same and they were stuffing garbage in their pockets. I had another extra bag, which I handed over to them.

After about 3 hours of continuous climb, we were drained. The tiring uphill trail coupled with an empty stomach was increasingly becoming tough for everyone. Our water supply of 2L was almost exhausted, which was anyway insufficient for six adults. We had expected to find a water source enroute in the jungle but there wasn’t any. Our focus had shifted from the enchanting surroundings to ourselves. The enthralling jungle was failing to divert our attention anymore and was becoming more of an ordeal that we wanted to get over with.

All of us were pushing ourselves. My backpack felt heavier than it was and with no water my throat was parched. My sisters were struggling.  While one of them kept complaining about a supposed hamstring in her thigh muscles, the other was finding it more demanding than the rest. She kept drinking glucose water and spraying Volini on her calves to keep her going. She was getting me worried if she could at all make it to the top. At one point where I was further ahead, she even napped for a few minutes somewhere in the trail – I have no clue how she managed to do that on the almost perpendicular flight of rocky and uneven stairway.

To keep myself going, I devised my own strategy. I started counting the steps and set myself a goal of 30 steps at a time. After 30 steps, I would rest for a few seconds and start towards another 30. I would silently congratulate myself for completing 30 steps and heave out a sigh of relief of having progressed a little ahead.

Towards the end I was so dehydrated that it was getting increasingly difficult for me to move on. Desperate, I requested Droning to run ahead and get some water for us as we continued our climb. After an arduous 4 hour climb, the jungle gave way to tall brown grasses on either side indicating we were almost at the top. A little while later the hilltop appeared in the form of a vast and sprawling meadow. What a moment that was! Phew! At the same time Droning arrived with a bottle of water. We guzzled up all the water in split seconds like raindrops on a parched land. After quenching our thirsts, we moved ahead and soon spotted Nokalikai falls shining in the bright afternoon sun.

Today, as I look back it feels good that we had chosen to walk that path. Several memories besiege me –

All of this I wouldn’t have known had I taken the concrete pathway. 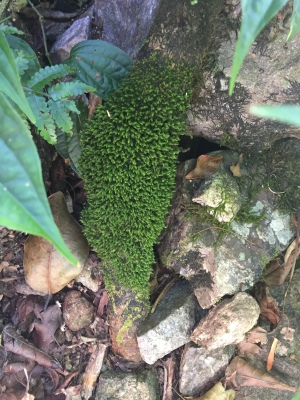 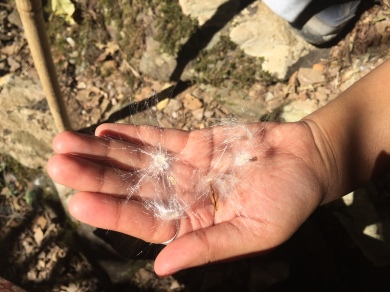