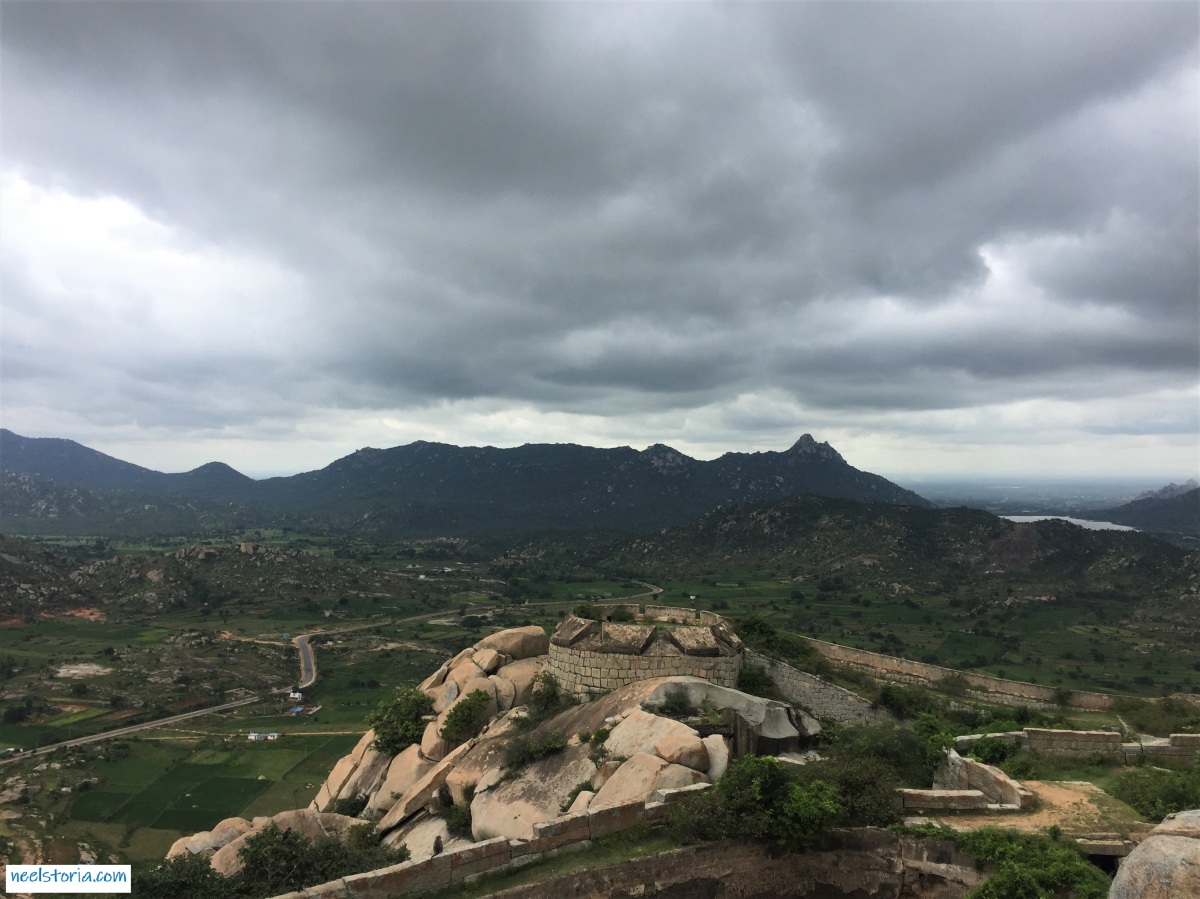 It was nearly two months that S was here, but we were yet to meet up. Both of us were occupied with something or the other and we could never make it. This weekend we were determined to make it happen. I had met S during the Kashmir Great Lakes Trek, where we had shared a tent together. It was an instant connect. Subsequently, she even visited my home in Shillong. S is quite an inspirational woman. She left her high-profile corporate job to follow her dreams and went on to set up her own homestay at Manali. It’s quite a story and guess I should write about it. Meanwhile check out her fabulous homestay, Firdaws. I haven’t been there yet, but the Instagram pictures are drool-worthy!

We decided to do go for a hike together instead of the usual meeting at a café or in our homes. I just suggested Gudibande Fort and that was it. A joined us too. A and I had just been to Hutridurga the previous weekend.

About 100 Km away from Bangalore, Gudibande is a small town located in Chikkaballapur district of Karnataka. It’s very close to Andhra Pradesh border. On a hilltop of this town is located the 17th century fort that was built by Byre Gowda, a local chieftain of the Vijayanagar Empire. An interesting trivia that we learnt from the Internet is that Byre Gowda was a Robinhood of sorts, who was a messiah for the poor but a terror for the wealthy.

It was a pleasant early morning drive as the car sped through the highway. Seated on the front seat of the car, A was relaying all kinds of information about the fort that he was reading up on his phone. Among other things, the Internet also said that the fort was closed due to the pandemic. We were already on our way and this information was conveniently ignored by all of us.

Soon the car took a turn and we found ourselves passing through winding village roads flanked by lush green fields, dotted by tiny boulder-strewn hillocks in the horizon. Large sections of these fields were dominated by tomato plantations. Certain sections had marigold plantations and the carpets of yellows and oranges were a sight a behold!

Soon we arrived at the large Bhairasagara lake. Located just a few kilometers ahead of the Gudibande fort, this lake was part of our itinerary. It being monsoon, the lake was teeming with water. At places, it felt like the water would overflow onto the road at any time. The hillock with the fort stood prominently and distinguishably in the background. After spending a little while by the lake, we decided to proceed towards the fort. The huge expanse of water deserved some dedicated time and we thought we would do that on our way back. Eventually, that never happened as we changed our plans went exploring another fort instead.

Soon we found ourselves at the base of a conical hill, on top of which sits the Gudibande fort. We could see a flight of broad cemented stairs going up, but it was barricaded by a red and white tape that ran across the breadth of the very first stair. A person sitting on a chair under a tree, who appeared like a guard seemed to be monitoring the place. So, the Google Map information was right afterall!

This was not a happy situation after having come all the way. As we wondered what to do, we found a couple of families coming down the stairs. This was our moment, we walked up to the guard-like person and asked if we could go up. He flatly refused. After requesting for a while, he allowed us charging a small sum (read bribe). Yes, we plead guilty!

It was a very easy walk up to the top and we made it in about 45 minutes. Most of the way we climbed through steps, some concrete, some just rocks, some carved out in the boulders. We passed through a couple of ruined doorways and through underpasses created by large boulders that touch on their vertices but widen at the bottom to create narrow passageways.

The weather was perfect with a patchy sky covered in floating clouds and no rain or sun. We met a few people who were going down and wondered if they had bribed the guard-like person too.

On reaching the top we realized that we had the entire ruins to ourselves. There was nobody other than us and that certainly was a privilege. We spent a good hour at the top accompanied by the light breeze and the gorgeous views of the plains below. S and I were meeting after a long time and had a lot to catch up on. We found a comfortable place at the edge of the fort wall overlooking the Bhairasagara lake down below, while A went about exploring the ruins all around.

Besides the ruins, there is a temple dedicated to Lord Shiva on top, which is believed to be one of the 108 Jyotirlingas that Lord Rama established in various parts of India. A filled us in with this and other information that he collected from Google while exploring the ruins.

Apparently, the fort edifice comprises of seven gateways though we saw only three. Ruined temples, caves sliced deep into the hillocks, and many secret passages that might have served as escape routes for the soldiers constituted the other highlights. Also, there are/were 19 rock ponds that could have been some form of water harvesting system. Again, we saw only a few. Byre Gowda seems to have been quite a visionary as he ruled this place only for three years and managed to leave behind this impressive legacy.

A was back, not just with his freshly gained Google information, but with a bunch of dry twigs that he collected while exploring the fort. Those twigs will add glamour to his newly designed living room. S and I were in the middle of an exuberant conversation, but we had to pause. It was time to leave.