A pan filled with oil simmered over a low flame as Ma peered onto it maneuvering a shining steel spatula with her spectacles daintily perched at the edge of her nose. Driven by curiosity, I take a closer look to discover the diamond-shaped flattened cubes seething in the hot foaming oil. Tossing and turning the cubes, she patiently waits for them to turn a reddish brown.

It was a Sunday afternoon and ‘Chana Daal Pithe’ was underway at my Bangalore home. Yes, it was that time of the year when my parents were visiting me.

Anybody who understands Pithe, knows the amount of labour that goes into its making. And Ma managed all of that single-handedly and more so after she had prepared breakfast, cooked lunch, even got me a bowl of fruits sometime in between, and doing a dozen other chores around the house. As I watched her with awe yet again, the same old thought crept into my mind – “Why don’t I have half the energy she has and how does she manage time to get so much done!” – All mothers have superpowers, I swear!

Chana Daal Pithe is an irresistible mouth-watering authentic Bengali sweetmeat. It is made by mixing boiled and mashed bengal gram, sweetened coconut shreds, khoya (milk thickened and solidified by heating in an open pan), and refined flour. The diamond-shaped flattened cubes are crafted out of the mixture and deep fried in vegetable oil. They are then dipped in sugar syrup, which is spiced up with cardamom. It’s often served by garnishing with a layer of kheer over it. (Kheer is milk with sugar, thickened to a certain consistency by boiling over low flame). Chana Daal Pithe is one of those special dishes that comes from Ma’s kitchen and like many other things is on the brink of extinction. I don’t know how many of us have the time and energy to prepare pithes even though we love to eat them……..I for one wouldn’t have the patience, I know that for sure! Grate the coconut, boil the gram, mix with flour, sugar and kheer in perfect proportions, and the right proportion happens to be really important, fry them over low flame while you prepare the sugar syrup separately…………PHEW! 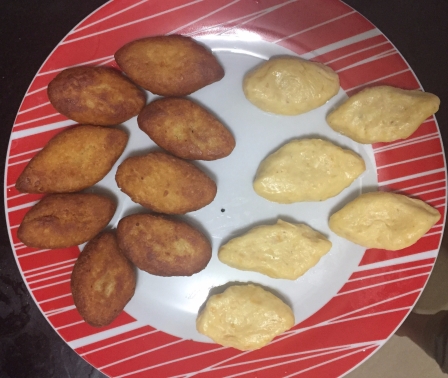 At the same time it upsets me to think that the future generations may never know what pithes are and how they taste. After all, you don’t get to buy pithes off the shelf. Though, I did see a few during Poush Sankranti in a sweet shop in Kolkata a few years back but definitely those wouldn’t taste like the home-made ones. A business opportunity hidden there? Hmm…..

Pithes are not any random dish and are not a part of our usual menu. It’s definitely not what fish is to us. Pithes are distinctive and special. It has to be a Poush Sankranti or a special occasion for pithes to make their appearance.

Besides Bengal, pithes are also popular in the states of Orissa and Assam. However, each state has their own set of unique and distinctive pithes.

Pithes have also been associated with a special kind of love, affection, and indulgence. Many of us associate our grandparents with pithes. I remember demanding pithes from my Thamma (paternal grandmother), who would not only be delighted but would do anything under the sun to fulfill our wishes. And Thamma’s pithes belonged to a different genre altogether, the range of pithes was way broader and the taste couldn’t be reproduced by anyone in the family.

Today, pithe is ritualistic each time we visit home or parents come over. A visit to my Pishi (aunt – dad’s sister) in Guwahati is also ritualistic each time I go home, and she will invariably have some pithes in store for me. Some of which would be prepared in a special manner for a longer shelf-life so that I can bring them back to Bangalore to savor at leisure.

Back in Bangalore, it was Chana Daal Pithe that Sunday afternoon and it didn’t stop at that. Puli Pithe, Lobongo Lotika, and Sureshkhowa happened on the following days. All of that prompted me to write about pithes, as I know for sure that pithes will soon become a thing of the past. Even now, the world swears by roshogollas as Bengali sweets, not many know about our exotic pithes.

Patisapta: White elongated rolled pancakes made with milk, refined flour, and semolina, stuffed with coconut or khoya or both; often served by dipping in kheer.

Lobongo lotika: Dipped in sugar syrup, stuffed with khoya or sweetened coconut shreds, the square-shaped parcels are created by neatly folding flaps of kneaded and rolled out flour, the ends of which are secured with a clove; and the clove in turn brings in a sudden pungent and spicy burst of flavor that sharply contrasts the sweet taste. 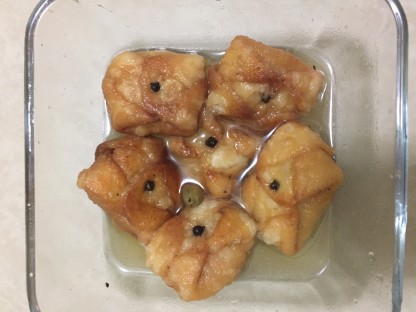 Lobongo Lotika with the distinctive clove

Puli Pithe: Semilunar flour parcels, folded with a definitive pattern at the edges, stuffed with kheer or sweetened coconut or both; optionally dipped in sugar syrup. 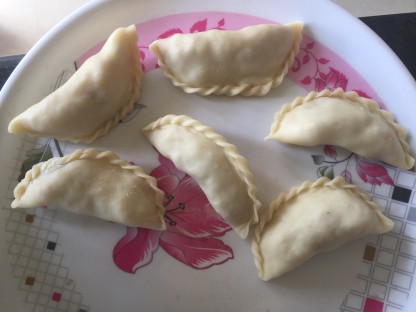 Puli pithe ready to be served. This one’s without the sugar syrup

Malpoa: Round flat, fried pancake dipped in sugar syrup, Fluffy inside with crisp edges made from khoya, flour, fennel seeds; often served by dipping in kheer. 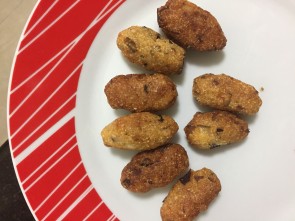 Sureshkhowa: Small oval balls made by mixing flour, semolina, coconut, with an optional sugar syrup coating; this can be stored for a longer duration

13 thoughts on “Tales of Pithe-Puli”

There’s no grand Durga Puja celebrations in Bangalore this time with puja pandals operating very minimally. In most places only members are allowed. We just got lucky with a Puja happening at a friend’s house. Though I’d rather say it’s Ma Durga’s grace that we could experience the festivities at a time like this.
Some pictures are for keeps
Only a few people can love you just the same way even on the days when you are barely your loveable self. It’s only family perhaps, as they don’t have a choice. Others will judge you, even desert you, at least for the moment.
My favourite gang of some of the most beautiful people. 💕💕
I had no idea so much went into photoshoots until my friend, a professional photographer, offered to do one for us. The camera and other equipment aside, there’s emotions, storytelling, choreographing, and so much more. It involves a LOT of hard work!
Life’s myriad hues ebbs and flows like hues of the ocean
Loading Comments...
%d bloggers like this: