The last few days have been quite incredible for me in ways more than one.

One of those arrived in the form of an email. One evening I opened my mailbox to find an email congratulating me for being nominated in the Best Travel Blog category of the Annual Bloggers Bash Awards. I had never received such kind of an email in my 1.5 years of joining the blogging fraternity. The awards that came by from fellow bloggers were through their own blog posts, and as protocol they would intimate me through a comment in any of my posts.

Needless to say that I was totally surprised as I had no idea about the Annual Bloggers Bash Awards. I was thrilled and skeptical at the same time. While it was amazing to think that someone thought my posts were worthy enough for a nomination, I wondered if this was some kind of a Phishing email and whether I should even click the associated link. Impulsively, I reached out to a fellow travel blogger with whom I now share a personal connection to enquire if he had received one too and if he knew anything about it. 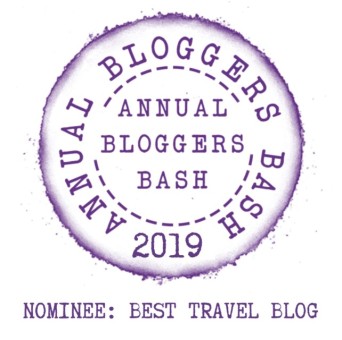 Subsequently, I came to know of many others who have been nominated for various categories and it does feel good to be part of the gang.

At the same time, I feel humbled and would like to express my sincere gratitude to whoever nominated me. I don’t know if my blog is worthy of this recognition at all but I am as delighted as can be!

I remember my younger days when writing an essay for English class in school would freak me out. As I grew up the essays got left behind as I went to college and university and studied Biology. The only writing I did was in the form of long and detailed emails that I would write to my friends, who had moved to other cities for further studies. Sometimes, I would write farewell notes, birthday notes, etc. to near and dear ones, which according to my family were too ‘flowery’ and they would compare me with Archies Greetings Card – quite tauntingly at that. I obviously didn’t mind and would take that as a compliment.

I started writing only recently and that too at the behest of a friend with the sole intention of documenting my travel experiences, only for myself. Not only did I discover my love for writing, it became one of few things that makes me energetic and gives me so much joy. Most importantly, I have connected with so many wonderful, genuine, and authentic people from the blogging world who have given me so much, from whom I have learned and still learning so much!

We never really know what lies around the corner. Life is a mystery indeed, a journey of self-discovery – sometimes nice and sometimes not.

31 thoughts on “Who Knows What Lies Round the Corner…”